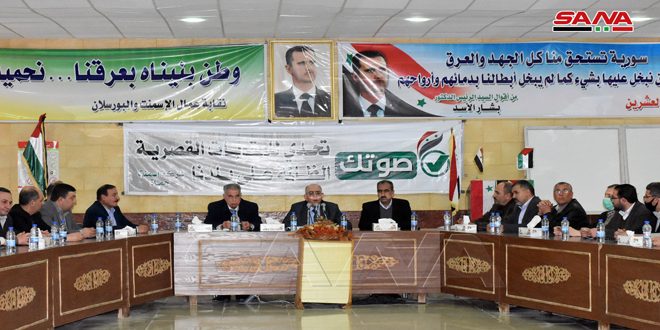 Hama, SANA- Upon the directives of President Bashar al-Assad, Industry Ministry honored on Wednesday a group of outstanding engineers, technicians and laborers from Hama Cement Company cadres who have exerted qualitative efforts in developing the production lines which contributes to reducing the costs, saving millions of Syrian pounds and raising the productive capacity of the company in light of the war and coercive economic siege imposed on Syria. Minister of Industry Ziyad Sabbagh said that the Ministry has honored a number of  outstanding engineers, technicians and workers in the company who managed through their creative ideas and exceptional endeavors and efforts to accomplish technical works and to carry out maintenance works for various machines and equipment in the factories of the company which saved hundreds of millions of Syrian pounds instead of importing them by foreign currencies, particularly in light of the unjust economic blockade imposed on Syria.

What has been achieved is an evidence on the distinguished national competencies and expertise and keenness on finding solutions and easing the repercussions of the terrorist war against Syria, the Minister said, asserting the importance of the vital role played by the industrial sector in the reconstruction process in Syria as it is “the engine of growth and the generator of the income.” Head of hardware and control department at the company Eng. Basel Fattoum told SANA reporter that the honoring is an incentive for him and his friends to continue the works and achievements for creating solutions to the technical problems that face the work.

Head of the Cement Mills Maintenance Department at Factory No. 3 Youssef Khaddour expressed his thanks for the generous gesture and good initiative of President Bashar al-Assad, expressing his and his friends’ readiness to exert all efforts to reduce the costs of production.

Head of the Maintenance Department at the Factory No. 3 George Eilan said that the honoring constitutes an incentive for finding solutions and means for preserving the distinguished production process in the company which is a pioneer company in the production of cement in Syria.

The honored worker Mohammad Kalhassan said that the honoring constitutes an incentive to continue their efforts and endeavors to keep the company in its best production conditions. 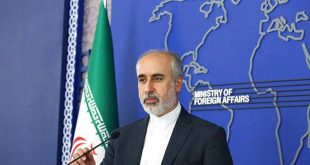