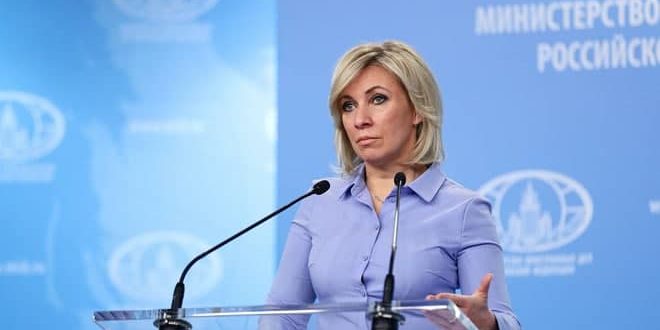 Moscow, SANA_ Russian Foreign Ministry’s spokeswoman, Maria Zakharova, on Friday stressed the necessity of strengthening joint international efforts to reach a solution to the crisis in Syria and stop attempts to disrupt these efforts through empty political statements.

“This is not the first time that such accusations have been directed against the Syrian and Russian armies as part of the brutal campaign launched by the United States and its allies by repeatedly copying attacks and fabricated news in this direction,” Russian news agency TASS quoted Zakharova as saying in response to new hostile statements made by the so-called the US special envoy for Syria Joel Rayburn.

Rayburn in his statements claimed that “Syria and Russia are trying to complicate counterterrorism operations”.

Zakharova noted that “enhancing the positive dynamism in the development of the situation in Syria on the ground raises anxiety among those who insist on their hostile policies against Syria.”

She called on Russia’s regional and international partners to enhance joint efforts to find a solution to the crisis in Syria in accordance with UN Security Council Resolution no. 2254, instead of sabotaging these efforts and making empty political statements and baseless accusations.

The Russian Diplomat expressed Moscow’s readiness for dialogue on the crisis in Syria with all concerned parties, including the United States, especially with regard to combating terrorism, indicating that her country is also open to any initiatives aimed at building relationships between the relevant agencies.

Zakharova indicated that the terrorists’ provocations in Idleb are still continuing, stressing that the fight against terrorism in Syria will continue until the terrorists are completely eliminated.