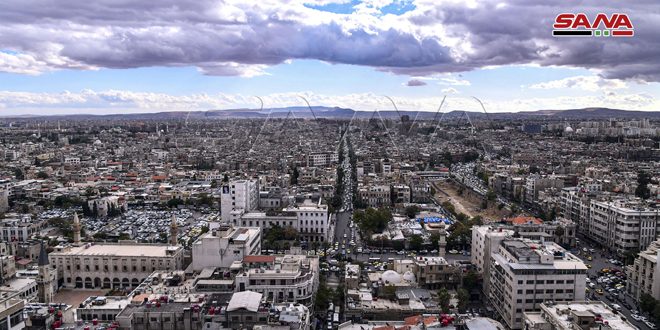 Damascus, SANA- Temperatures will remain lower than average as the country is affected by a low air pressure in all layers of the atmosphere accompanied by a cold and wet air mass.

The Meteorology Department expected in its Thursday bulletin that the skies will be partly cloudy to rainy, heavy rain is expected, particularly on the eastern and al-Badia areas. Fog is expected at night and in the early morning in most of the inland areas.

The heaviest rainfalls amount in most of the Syrian provinces has reached 136mm in Tartous.

Rainfalls amounts in the Syrian provinces according the Ministry of Agriculture and Agrarian Reform’s rain bulletin have reached:17mm in Damascus and its Countryside, 4mm in Sweida, 20mm in Daraa, 75mm in Homs, 81mm in Hama, 34mm in Lattakia, 24mm in Idleb, 12mm in Aleppo and 1mm in Deir Ezzor.

thursday weather 2020-12-17
hala
Share
Previous Mikdad: Syrian-Russian relations are strategic
Next Foreign and Expatriates Minister Faysal Mikdad, in prelude to his talks with his Russian counterpart Sergey Lavrov : We thank Russia for standing by Syria’s side in the face of terrorist war waged against it, expressing hope to enhance strategic relations between the two countries.