Homs, SANA-Prime Minister, Hussein Arnous, inspected on Saturday the 22 and 10 distillation units at Homs Refinery which have been rehabilitated and developed, in addition to conducting the annual maintenance of the 10th unit to improve the performance and doubling the production of oil derivatives.

“We as Syrians are proud of the national expertise and cooperation between the workers and experts in the universities and the private sector that are working to restore the refinery to its production capacity despite the blockade and pressure and the inability to secure Spare parts due to the unilateral coercive measures imposed on Syria.”

The Prime Minister added that there is a program in the Ministry of Oil and Homs Refinery to reach the highest possible production capacity, as deep maintenance work was carried out in the Banias Refinery and its production became excellent, explaining that maintenance work will continue until all distillation units return to their normal state.

During his meeting with the staff of the General Company for Homs Refinery, Engineer Arnous affirmed that the development of the company will not stop, stressing the importance of institutional work and exerting utmost efforts to reduce waste in all its forms and scrutinize spending and repair fees.

In Tartous, the Prime Minister was briefed on the mechanism of emptying the grain silos operating in the port of Tartous, which came under fires and he listened to an explanation by parties concerned about the measures that had been taken and the stages of work.

2020-12-05
bushra
Share
Previous Al-Kuzbari: fourth round of the Committee of Discussing the Constitution discussed national principles and return of refugees
Next Putting out a fire erupted in Mezzeh in Damascus 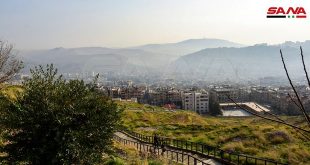 Damascus, SANA-Temperatures continue to rise to become around average as the country is affected by …