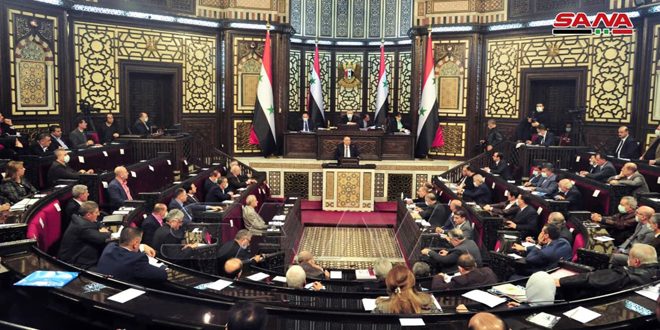 Damascus, SANA – The People’s Assembly in its 23th session of the 1st ordinary round of the 3rd legislative term chaired by its Speaker Hammouda Sabbagh on Thursday discussed the performance of Information Ministry and issues related to its work. Minister of Information Imad Sara presented the ministry’s strategy, media vision and general principles represented by consolidating and consecrating the blood of the martyrs who sacrificed for Syria’s sovereignty and dignity and documenting the heroism of the Syrian Arab Army.

Minister Sara explained that the ministry, with all its institutions, is working to unveil the crimes of terrorism and document terrorist crimes to expose the axis that support terrorism led by the United States and a number of entities and regimes such as the Zionist entity, in addition to covering developments and circumstances occurring in Syria and the world.

He affirmed that the ministry is ready to accept any criticism aimed at improving the work and professionalism, indicating that the success of the Syrian media is measured by its standing in the face of the media empires that tirelessly work to target and abuse Syria.

The Minister indicated that the Ministry has been working for nearly two years to address challenges related to form, content and technologies by developing and unifying the audio and visual identity of national channels and radio and achieving harmony between them.

He lauded sacrifices of journalists as 40 of them were martyred and others 60 were injured.

A number of MPs called for speeding up the completion of the new media law and enhancing confidence with the citizens by highlighting issues of concern to them and activating the role of the media by following up on issues of corruption and defect.

Some members emphasized the importance of enhancing the role of the Union of Journalists, investigative and electronic media, supporting media centers in the governorates, developing national media technically and securing the requirements of media work so that the media staff can transmit the reality image.