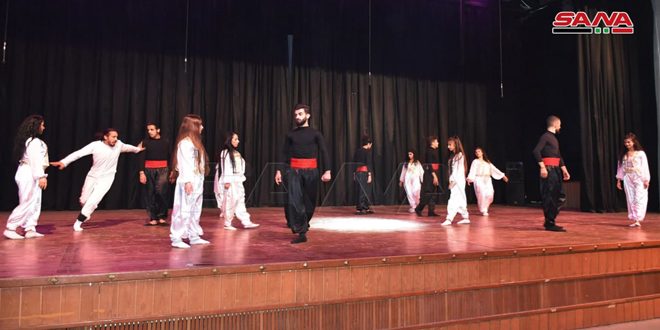 Hama, SANA- Activities of 2nd edition of al-Maghout Cultural Theater Festival, which was held by the Directorates of Theaters and Music, in cooperation with the Directorate of Culture in Hama, were opened at Dar al-Assad for Culture and Arts in al-Medina in Hama city.

Taha added that the artistic and creative level of all the shows satisfies the passion of the lovers of theater and those are interested in the theatrical movement in the province.

The Ahwal Wa Mal “Conditions and Money” play by Orkida for dancing theater troupe and Hama Directorate for Culture has opened the shows of the festival.

The play portraits the struggle between good and evil and the soul and the body within dramatic framework that combines the collective expressive dancing and the theatrical sketches.

Mohammad al-Maghout was a renowned Syrian writer and poet. He was born in 1934, in Salamiya city, Hama province. al-Maghout was credited as the “Father of the Arabic free verse poetry”, liberating the Arabic poems from the traditional form and revolutionizing the structure of the poem. He wrote for theater, TV and cinema. Al-Maghout’s work combined satire with descriptions of social misery and malaise. He co-operated with Syrian actors Dureid Lahham and Nihad Qal’i to produce some of the region’s most popular and acclaimed theatrical works, such as Kasak ya Watan (Toast to the homeland) and Ghorbeh (Estrangement). Al-Maghout died at the age of 72 in April,  3, 2006.