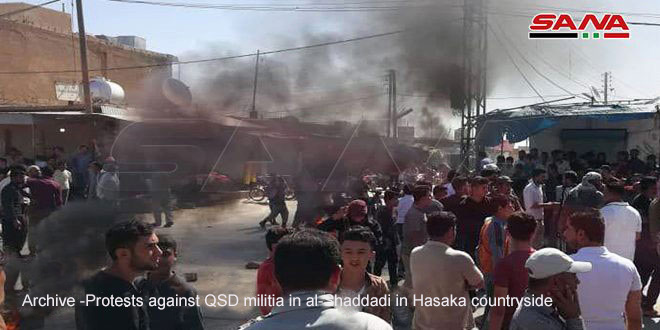 Hasaka, Raqqa, SANA –Two of US–backed QSD militants were killed in al-Hawl camp and the vicinity of Ayn Issa in Hasaka and Raqqa.

Local sources from al-Hawl camp told SANA reporter that unknown persons targeted with bullets one of QSD militants in the 4th section from the camp located in the east of Hasaka city which led to the killing of the militant.

Meanwhile in northern Raqqa countryside, local sources affirmed that one of QSD militants was killed in the vicinity of Ayn Issa city in blast of a landmine while he was planting near one of QSD militia positions.

The militia deliberately plant mines around their positions after increasing attacks against them recently.