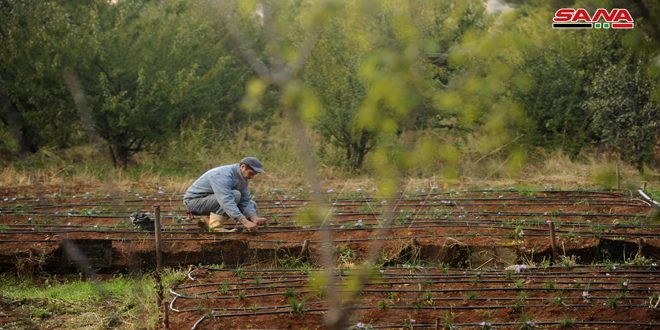 Damascus Countryside, SANA_ Saffron has been one of the oldest herbs known to mankind and the most famous and oldest types of expensive spices around the world. it is a treasure trove.

Saffron, popularly known as Kesar in Hindi, is the most valuable medicinal food product because of its importance in the world’s economy. This spice was used by several civilizations for its importance in pharmaceutics, cosmetic, perfumery and textile dye-producing industries.

Saffron, or the red gold, has become a promising cultivation in various regions of Syria after the success of experiments that yielded good results that matched the best types of saffron produced worldwide.

SANA’s camera visited the saffron fields in Sargaya and al-Zabadani in Damascus Countryside and reviewed the developments of cultivating saffron in terms of number of flowers, the production and quality of stems, methods of cultivation and how to spread it in order to become a promising cultivation of strategic crops and so a new economic resource for people with limited incomes and poor families. Assistant Minister of Agriculture and Agrarian Reform Dr. Louai Aslan told SANA that the ministry seeks to develop and spread aromatic crops with economic returns on a large scale.

He said that after the success of saffron cultivation in the studied and tested sites, it was approved as a promising plant according to a working matrix to multiply and spread it in Syria Over 13 years.

Dr. Aslan pointed out that the working matrix includes three stages. Saffron cultivation is also being tested in research centers at the agricultural directorates in Sweida, Damascus countryside, Lattakia, Tartous provinces, and ACSAD research centers with the aim of ensuring the success of its plantation.

He added that a number of symposiums and workshops are constantly being held to introduce technicians and farmers into how to grow it. She explained that in 2018 a committee was formed by the Ministry of Agriculture , GCSAR , the University of Al-Baath, ACSAD , and the Federation of Chambers of Agriculture with the aim of reviving the cultivation of saffron and distributing its bulbs to the families of the martyrs and the wounded personnel of the Syrian Arab Army and the poor families through the rural development project, especially since the cultivation of saffron in Syria gives the best results with the lowest costs.

In turn, agronomist Ghassan Rostom, a specialist and expert in saffron cultivation, confirmed that strenuous efforts by the private sector to cultivate, produce and spread saffron in Syria have reached seven governorates including Hama, Damascus countryside, Sweida, Homs, and most recently Lattakia, Tartous and Aleppo.

Head of the Medicinal and Aromatic Plants Department at the GCSAR agronomist Reem Rostom pointed to the medicinal importance of the plant, as it contains effective substances that make it a cure for a number of diseases and a general tonic for the body and is safe even for the treatment of children.

With regard to the cultivation of saffron, Rostom indicated that the environmental conditions in Syria are ideal for the growth of this plant, which is a perennial that can survive up to 8 years. She indicated that harvesting the crop is a very sensitive process that begins with the flowering of the plant in November, when flowering continues for 15 days, and then the flowers are picked by hand in the early morning to maintain the highest concentration of active substances in the stigmas.

Rostom called on the concerned authorities to find a mechanism to regulate marketing and selling process in the name of Syria because the price of a gram of saffron is equivalent to a gram of gold externally and so it is called red gold. For his part, the farmer Tahsin Namous emphasized the success of his experience in cultivating saffron, as it gave more than 10 thousand flowers and did not require much cost or labour. 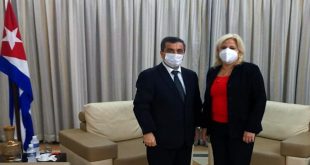