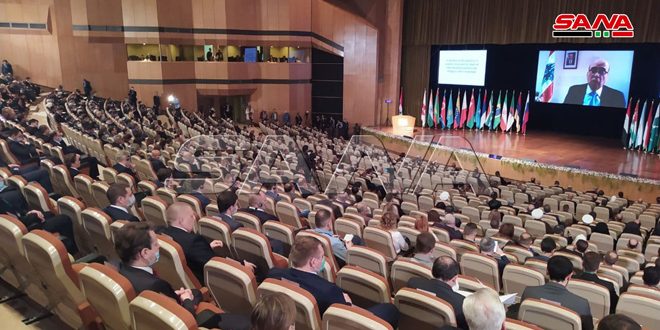 Damascus, SANA- Lebanese Foreign Minister Charbel Wahbeh stressed the necessity of intensifying international efforts to guarantee safe, decent and gradual return of the Syrian refugees to their homeland without preconditions after the circumstance have become appropriate for this return.

In his speech via video during the International Conference on the Return of the Syrian Refugees currently held at the Umayyad Palace for Conferences in Damascus, Wahbeh pointed out that following more than nine years of the crisis in Syria, Lebanon hopes that all who have been displaced will return to their homeland in order to contribute to the reconstruction and development of their country, particularly that the largest part of the Syrian areas has become secure and stable.

He indicated that the main obstacle facing a permanent solution to the issue of the Syrian refugees is the absence of the unified international will and lack of good intention.

He said that the presence of about one and a half million Syrian refugees in Lebanon contributed to aggravating the economic burdens of the Lebanese state due to the exceptional health and economic conditions that Lebanon, the world and the region are witnessing which necessitates more than ever to intensify the international efforts to guarantee a safe, honorable and gradual return of the Syrian refugees to their homeland.

Wahbeh expressed his country’s hope that the international conference on the return of refugees would contribute to finding a solution to the crisis of displacement and asylum, and it forms a basis for the return of displaced Syrians and an important stage in easing the suffering of the countries which are hosting large numbers of refugees.

For his part, Minister of Social Affairs and Tourism Ramzi Musharrafieh said that after ten years of the beginning of the crisis in Syria which led to the displacement of millions of Syrians, the conference stressed the Syrian state’s intention to work on safe and decent return for the Syrian refugees.

He indicated that Syria needs the efforts of its citizens in rebuilding what the war and terrorism have destroyed.