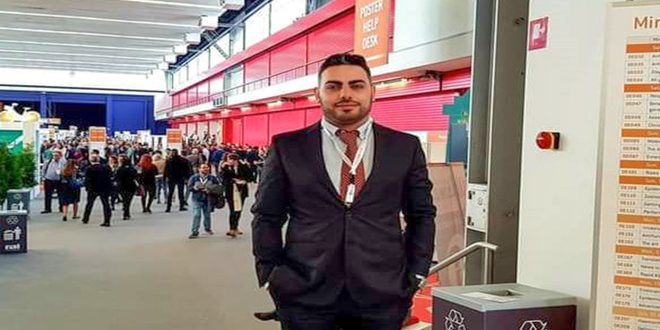 Lattakia, SANA-Syrian Pharmacist Zein Ba’eiti won the first place in Cancer Treatment Department and antibiotic resistance after he has participated in the first conference of the European University Alliance for the Global health which encompasses five well-known universities in Germany, France, Portugal, Sweden and Hungary. Dr. Ba’eiti, who has graduated from the Faculty of Pharmacy in Tishreen University and is studying Ph.D. at University of Szeged in Hungary, stressed, in a statement to SANA, the importance of the study he has presented to the Conference which tackles the phenomenon of the heterogeneous resistance to antibiotics on the anaerobic germs which are existed with large numbers in human body and cause a huge failure in antibiotic treatment.

Dr. Ba’eiti added that his research contributed to further understanding of the phenomenon of Bacterial resistance to antibiotics, which kill at least 700,000 persons annually, meanwhile cancer kill millions of people annually.

According to World Health Organizations’ reports, the death toll due to this phenomenon is expected to increase by 2050, Dr. Ba’eiti emphasized that if we found out the resistance mechanism, the chances of treatment would increase more quickly and effectively.

Dr. Ba’eiti was born in 1989, graduated from the Faculty of Pharmacy at Tishreen University in 2012, he obtained a master of medical laboratory diagnostics in 2017. He took part in many local and international conferences.