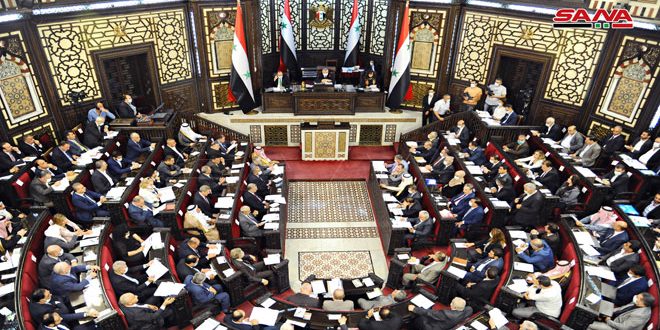 Damascus, SANA_ The People’s Assembly on Sunday began the discussion of the government’s financial statement on the draft state budget for fiscal year 2021.

Finance Minister Dr.Kenan Yaghi presented a summary of the government’s financial statement on the draft state budget for 2021.

He said that it reflects the general framework of the government’s financial plan to finance the development process through the optimal investment of available resources and securing reconstruction requirements and production and mitigating the negative effects on the standard of living of citizens, especially after increasing challenges on the national economy

Minister Yaghi pointed out that among the most important things taken into account in the draft budget for 2021 are mechanisms to stimulate the national economy, restructure public spending, determine available reservoirs to increase revenues, reduce expenditures, maintain state resources, improve the quality of basic services provided to citizens, strengthen factors of steadfastness, seek to improve the living situation and provide basic goods with stable prices and support for small and medium industrial and agricultural facilities.

on Thursday, Oct. 22, President Bashar al-Assad referred the bill on the state general budget for the 2021 fiscal year to the People’s Assembly.