Homs, SANA-The citizens of HabNamra in Wadi al-Nadara in the western countryside of Homs work in the orchards of the olive trees, some of them reap the fruits of olives that were not affected by fires, and some of them took upon themselves with determination to restore life to their trees that were affected by the fire by pruning and refining them and removing the affected ones so that they return to green as the nature of  al- Nadara Valley freshness.

SANA toured the olive groves in the town of HabNamara and met the farmers on their lands, Hassan Hazeem with great vigor collecting the damaged branches due to the fire that affected his orchard and pruning the trees with little damage and said “our olives do not die and they will remain green as our valley.”

Hazeem pointed out that he is now cleaning and refining his field because his father told him that if the roots are not burned, the olive trees will grow again, and when he finishes the cleaning and pruning process, he will cultivate  new plants instead of the completely damaged ones.

Youssef Azar indicated that he and his wife came early in the morning to the orchard to pick green olives and prepare them for winter supply, pointing out that the current year’s season is good and he will harvest completely if the rain falls.

2020-10-19
Manar
Share
Previous International artist , Mustafa Ali .. journey enriched with creativity and cultural project beyond limits
Next Farmers of HabNamra village in Homs countryside reap the olive trees that were not affected by fires 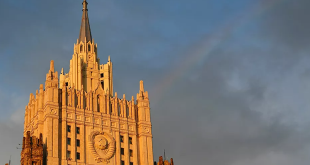 Moscow, SANA-  Russia on Friday renewed its strong criticism of the US Secretary of State …