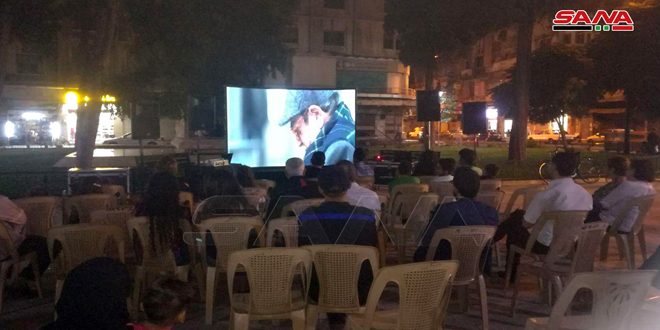 Homs, SANA- The General Establishment for Cinema launched on Saturday the first screening of the “Outdoor Cinema” festivity in Homs city in the park opposite to al-Kendi Cinema through screening the feature film “Damascus… Aleppo” by director Bassel al-Khatib.

It tells the story of a virtual journey in a bus transporting passengers between Damascus and Aleppo where a group of people of different ages, orientations and opinions are gathered, reflecting the Syrian society with its diversity and social pluralism.

Assistant director of the General Establishment for Cinema Bassem Khabbaz told SANA reporter that the screening of the movie is a part of a festivity that reaches the audience everywhere, but not the opposite, as the Establishment chooses the places where people are mostly gathering, then moves its equipment to screen the films.

The screening of the opening film “Damascus…Aleppo” will continue on Sunday, according to Khabbaz, adding that on Monday the two films of al-Asheq “The Lover” and Maward will be screened in the same place at 07:00 p.m..

The audience described the festivity as an interesting experience, particularly that the weather is suitable for such shows.

In regard to the screening of Damascus… Aleppo film the pointed out that the film carried the pulse of the Syrians and reflected part of what Syria has lived during the past years.

The Festivity which was launched by the General Establishment for Cinema in the Central region was kicked off in Salamiya area in Hama province and Eyoun al-Wadi in Homs province.
Hala Zain