Al-Jaafari: Syria calls for making the Middle East a region free from Weapons of Mass destruction

New York, SANA-Syria’s permanent representative to the UN, Dr. Bashar al-Jaafari, said that Syria calls on all member countries to make the Middle East a region free from nuclear weapons and all weapons of mass destruction.

Al-Jaafari, during a meeting of the First Committee at the General Assembly concerned in disarmament and the International Peace on Friday, pointed out to the need for exerting pressure on the Israeli occupation entity and force it to join the Disarmament treaty as a non-nuclear party and to subjugate all its nuclear activities and facilities to the observation of the International Atomic Energy Agency.

“The Israeli occupation entity’s arsenal of the biological, chemical and nuclear weapons poses the biggest threat to the Peace and security in the Middle East and it has formed throughout decades and still forms a grave challenge to the disarmament and non-proliferation system,” al-Jaafari said.

In turn, al-Jaafari added that all knows that Syria is a member in the nuclear non-proliferation treaty since 1968 and it has signed the treaty of the prohibition of biological treaty of 1972 and it is also a member in the chemical weapons convention since 2013, Syria has also welcomed the conference of establishing a region free from nuclear weapons and weapons of mass destruction.

“Syria also submitted a draft resolution in 2003 to make the Middle East a region free from all weapons of mass destruction, particularly the nuclear ones, but the US delegation threatened to use veto at that time,” al-Jaafari said.

He stressed that Syria strongly condemns any use of weapons of mass destruction, including the chemical weapons by anyone and under any condition and in any place or time, and Syria has not and will not use any chemical weapons because it doesn’t possess any of them and it joined the Chemical weapons’ convention in 2013.

Al-Jaafari clarified that Syria sent more than 200 messages to the Secretary-General of the United Nations, the Security Council, to the OPCW, the resolution Committee of 1540 and committees concerned in the fight against terrorism, about the terrorist organizations’ possession of toxic chemical substances and using them against civilians and military personnel with a support of governments of well-known countries and their intelligence. 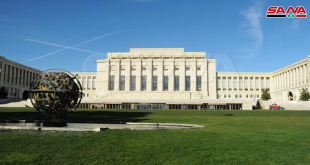