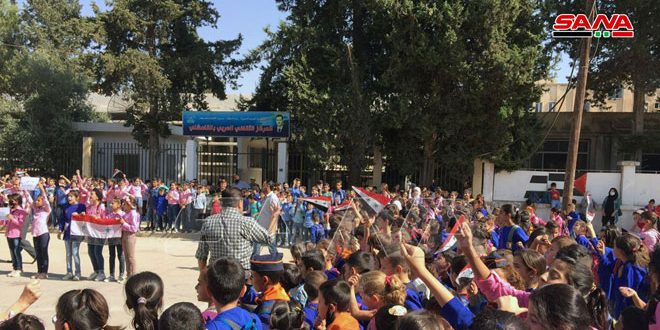 Hasaka, SANA- The educational cadres and students in Qamishli City on Thursday organized a stand in front of the educational compound in protest against seizing schools and closing them by the US occupation-backed QSD militia.

participants in the stand raised banners denouncing the actions of the militia in depriving the students from the right to learn and calling for the reopening of schools, chanting slogans saluting the heroic acts of the Syrian Arab Army.

Head of the educational complex in Qamishli, Hassan Al-Hussein, told SANA reporter that citizens of Qamishli reject and condemn the closure of schools by QSD militia as this led to the suspension of the wheel of education and deprived children and youth from completing the education process.

In turn, teacher Ahmed Khalaf pointed out that what is happening in the governorate is a process of ignorance and deprivation of the legitimate right of children, and this closure of schools poses constitutes threat to public health as a result of the unnatural increase of students in the same classroom.

A stand in Qamishli in protest against seizing schools and closing them by QSD militia 2020-10-15
ruaa-jazaeri
Share
Previous Haddad: terrorism went far in destroying Syria’s medical infrastructure, scientific cooperation with Russia is a priority
Next Upon directives of President al-Assad, allocating 2.370 billion SYP to areas affected by fires in Lattakia and Tartous 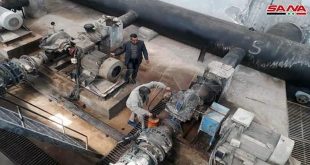 Hasaka, SANA-The General Establishment for Drinking Water in Hasaka has started to pump water to …