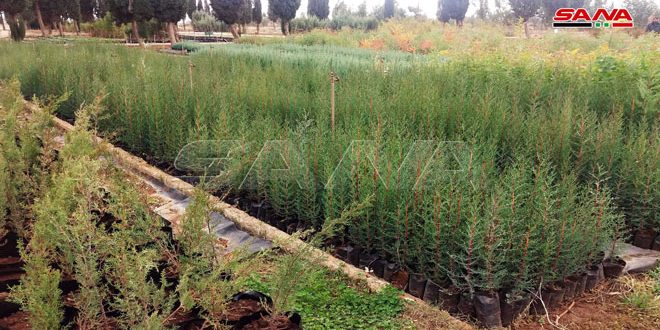 Damascus, SANA_ The Ministry of Agriculture and Agrarian Reform has completed its production plan for afforestation, which it will implement as part of the national afforestation campaign.

Director of Forestry at the Ministry Dr. Hassan Fares, told SANA reporter that reforestation of areas that have been exposed to fires and increasing green areas are among the Ministry’s priorities during the next phase.

The campaign, which is due to begin on November 1, and ends in late March, aims to restore the beauty and glory of the lands, Fares said,

He added that the areas that were exposed to fires in Al-Ghab and Misyaf regions in Hama governorate were counted and their borders were accurately determined in cooperation with the General Authority for Remote Sensing.

An area of about 50 meters around the area affected by fires will be afforested.

The aim of this high speed of afforestation is to protect forest sites from encroachment in addition to the safety of the site and to prevent erosion.

Fares indicated that the Ministry of Agriculture, represented by the Directorate of Forestry and its departments in the governorates, is working to implement the tasks of increasing green areas, rehabilitating and planting damaged and burned sites.

He pointed out that the number of the forest plantings which are produced and scheduled to be planted during this season amounted to about 6 million seedlings that will be distributed on the 4 thousand-hectare forest sites, adding that the afforestation requirements are secured in all governorates.

The Ministry, according to Fares, is working according to a participatory approach with organizations, institutions, civil societies and volunteers in the afforestation campaign and welcomes any civil initiative that contributes to increasing the green space according to its requirements.

He emphasized the importance of encouraging the establishment of all environmental activities and voluntary initiatives that serve the environment and people.

“Preserving the environment is everyone’s responsibility and that afforestation campaigns contribute to the cooperation of volunteer teams and spreading the culture of planting and agriculture, Fares mentioned.

He referred to the coordination with the Ministries of Higher Education and Scientific Research and Education, the Agricultural Engineers Association, the Revolutionary Youth Union and the Vanguards of al-Baath, and the Syrian Student Union to develop a work program and methodology for cultivating all the spaces surrounding public and private schools, universities and institutes.

This program would define the areas that can be cultivated and the bodies responsible for caring for plantings and species that are appropriate to the conditions of the region in which the school, institute or university is located, with an emphasis on the role of each party in securing the plants and moving them to the planting site and how to take care of it.