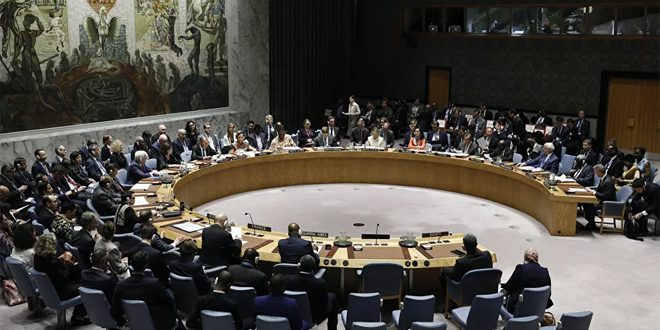 New York, SANA-The Security council called for immediately stopping the fight between Armenia and Azerbaijan over the disputed region of Nagorno-Karabakh.

The AFP quoted members of the council as saying in a statement that they express “Their support for the UN Secretary-General’s call on the two sides to immediately stop fighting, deescalate tensions and return to meaningful negotiations without delay.”

The council’s members “expressed concern over reports of large-scale military actions along the Line of Contact in the Nagorno-Karabakh conflict zone,”

“They strongly condemn the use of force and regret the loss of life and the toll on the civilian population,” they added. “Security Council members expressed their full support for the central role of the OSCE Minsk Group Co-Chairs and urged the sides to work closely with them for an urgent resumption of dialogue without preconditions.”

The presidential statement of the Security Council was issued at the end of an emergency meeting held by the Council at the request of its European member states, namely Belgium, Estonia, Germany, France and Britain.