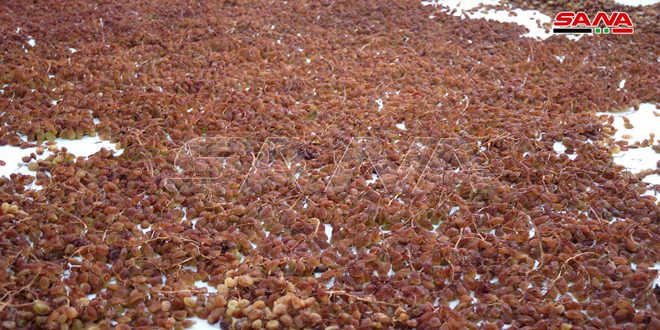 Sweida, SANA- The Sweida Agricultural directorate estimated the total production of raisins made by grapes fruits for the current season at about 5,400tons.

In a statement to SANA reporter, Assistant director of Agriculture department , Eng. Alaa Shuhaib, said that the percentage of grapes used in the raisins manufacture estimated relatively at about 10% of the total annual production and its manufacture is concentrated in regions of al-Kafr, Orman, Qanawat , Maf’aleh , Hibran and Mayamas and Sahwet al Khudr.

Shuhaib noted that the production of raisins for the current season is good and achieves an additional value to farmers via its manufacturing processes instead of selling grapes directly.

The raisins industry in Sweida province constitutes a traditional career that reflects the particularity of area and traditions of its people because of the abundance of grapes whose bushes exceed at 4 million.
Hybah Sleman / Mazen