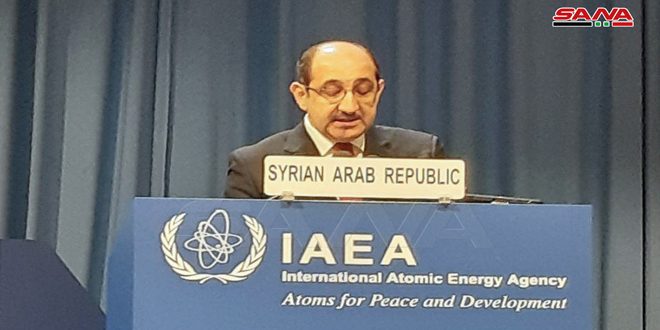 Vienna, SANA-Syria’s permanent representative to the International Atomic Energy Agency (IAEA) in Vienna, Bassam Sabbagh affirmed that discussing the applying of the Guarantee agreement in Syria is a clear example of some countries’ exploitation of the Agency to serve their political agendas instead of condemning Israel’s aggression on the sovereignty of the Syrian territories in 2007.

“The Israeli recognition of the responsibility for that aggression after a decade of deny and lie requires from the Agency to dispatch its inspection mission to “Israel,” Sabbagh said in a statement to the 64th session of IAEA General Conference in Vienna.

He underlined Syria’s transparent cooperation with the Agency, adding that Syria has not spare any effort to settle the pending issues including agreement on a work plan.

The Ambassador went on to say that Syria welcomes Iran’s commitment to meet its obligations according to a comprehensive work plan.

He concluded by thanking the Agency’s vital efforts in the framework of COVID 19 pandemic, hailing the swift response of the Agency in offering the necessary help to Syria, pointing out to the negative impacts of the unilateral economic measures imposed on Syria.