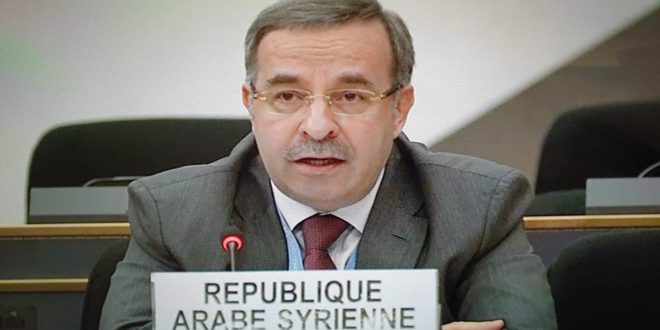 Geneva, SANA- Syria has reiterated its support for the Belarusian president-elect Alexander Lukashenko, and underlined its full confidence in the decisions of the Belarusian people and the wisdom of their leadership and government

That came in a statement made by the permanent representative of the Syrian Arab Republic to the United Nations office and international organizations in Geneva, Ambassador Hussam Eddin Ala during the session of the Human Rights Council to discuss the situations in Belarus.

During the session Syria criticized the use of the council to exert political pressure, interfere in the internal affairs of states and to threaten their sovereignty and stability.

Ambassador Ala denounced the attempts of the European Union to exploit the Human Rights Council to influence the results of the presidential elections in Belarus and provide direct support to one of the political parties.

Such European intervention, according to the Syrian representative, constitutes a flagrant violation of international law and the role and mandate of this Council and a continuation of the double standard policy.

He warned of the role of the council’s politicized sessions in inciting unrest and violence in Belarus and in undermining the government’s efforts to restore stability and social harmony through the announced political initiatives.

Earlier, the Syrian Foreign Ministry expressed Syria’s support for the friendly Republic of Belarus in the face of attempts to interfere in its internal affairs.