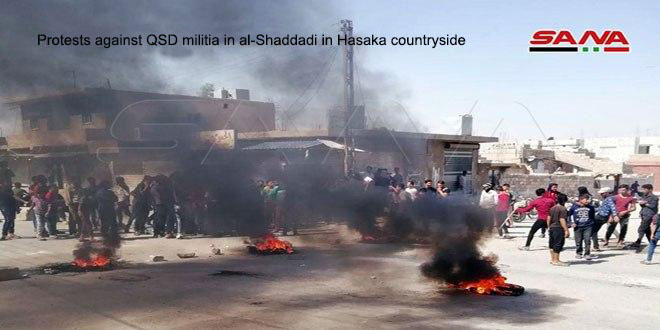 Hasaka, SANA- US occupation –backed QSD militia continued its attacks against people in Hasaka countryside and kidnapped several of youths in al-Shaddadi city to force them coercively fight in their ranks and points where they are positioned in the Syrian Al-Jazeera region.

Civil sources told SANA reporter in Hasaka southern countryside that QSD militia launched raids campaign in al-Shaddadi city and kidnapped a number of youths, taking them into training camps of so- called “Self-Defense Duty “to forcibly recruiting them in the ranks of those militias.

On Friday,Groups of QSD militia stormed into several houses in Qamishli and kidnapped a number of youths and took them to unknown destinations.

The countryside of Hasaka and Deir Ezzor have been witnessing popular demonstrations demanding the expulsion of US occupation and QSD militia which continued in harassing the people, stealing the properties and besieging a number of villages and towns, in addition to arresting tens of youths and attacking notable, tribal sheikhs, and stealing the resources of the al-Jazeera region.