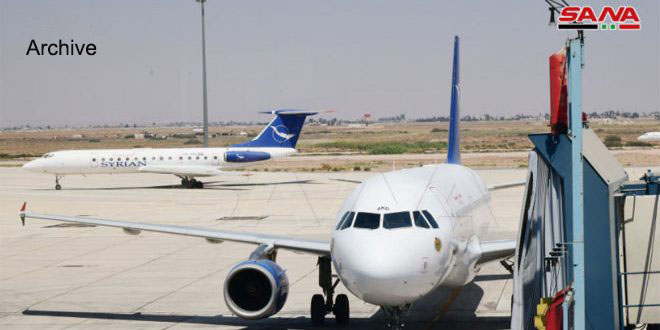 Damascus, SANA- Syrian Airline plane arrived on Friday afternoon transporting 257 Syrian citizens coming from Kuwait in the framework of the government’s efforts for evacuating the Syrian citizens stranded abroad , according to a statement by Transport Ministry.

On August 27th, a Syrian airline plane carrying 250 Syrian citizens arrived in Damascus international Airport from Egypt in the framework of the governmental efforts to repatriate Syrians living abroad.

Earlier, Interior Ministry called on Syrian citizens who are wishing to repatriate to communicate with Syrian embassies in Cairo, Muscat, Abu Dhabi, Dubai, Oman, Kuwait, Khartoum, Manama, Moscow, Algeria, and Baghdad to register applications expressing their desire to return to Syria, so that the special government team can prepare a program for Syrian Airlines flights as part of the government’s efforts plan to return Syrian citizens stranded abroad.

On May 4th, the Syrian Airlines started to run flights to repatriate Syrian citizens who are willing to return to Syria from different countries of the world according to lists registered through the Foreign and Expatriates Ministry at the embassies and the diplomatic missions.

2020-09-04
hybah
Share
Previous Turkish occupation mercenaries kidnap ten of the citizens of Luthi village in Hasaka countryside
Next Sweida production of summer vegetables is estimated to increase by nearly 8,000 tons for the current season