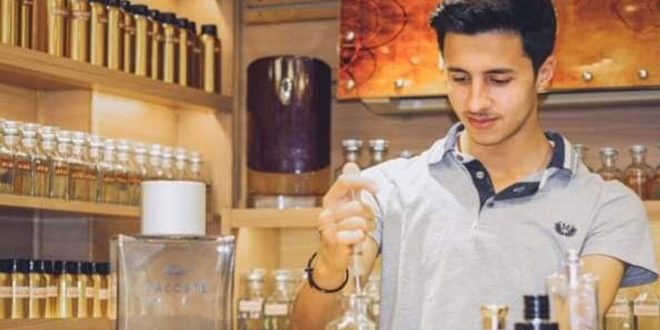 Damascus, SANA – Anas Abbas inherited the secrets of the craft of perfumery from his father he used to take him to his shop in Damascus where he made perfumed perfumes since he was a child, secrets which helped him unlock the doors to international fame and success.

While the ambitious youth was busy helping his father in the shop, Abbas decided to go beyond replicating and selling perfumes; he developed the skills he had been acquiring during the past years to the point where he managed to invent a unique perfume which enabled him to enter the Guinness World Book of Records.

Speaking to SANA, 20-year-old Abbas said the real turning point in his life came in 2014 after he won third place in a perfume-making competition in Lebanon, managing to surpass ninety competitors from various countries with his inventions that utilize oriental components, on top of them a unique perfume he named “Damascus is the city of jasmine” using a base of Damascene jasmine and vanilla.

This perfume, which took Abbas one year to create, is unique in that its scent changes every five minutes in a variety of ways; its top note is natural jasmine, while its base notes are oud (agarwood), vanilla, and coconut, and these notes shift according to the nature of the skin if it’s dry, oily, or mixed.

He said that his perfume garnered him considerable reputation after it gained renown in Syria and abroad, reaching the world’s perfume capital, the French city of Grasse, where it earned him membership in perfume committee there.

Abbas added that the perfume became famous in many Asian and European countries which encouraged him to apply for the Guinness World Records, and he was surprised later to know that his application was accepted and that his invention received the membership No.144267.

He noted that large amounts of the perfume were sold in Europe, Asia, and China, adding that this perfume is ideal for all times and occasions.