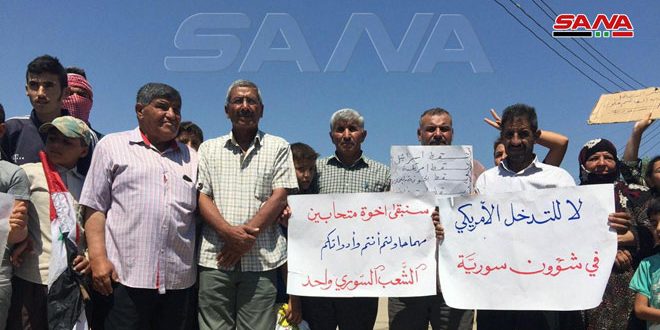 Hasaka, SANA- Locals in al-Rashwanieh village in Qamishli countryside staged a national stand in rejection of the presence of the US and Turkish occupation forces on Syrian territory, demanding to expel them and to put an end to the unilateral coercive economic measures that constitute a direct aggression on the Syrian people.

The people of the village raised the Syrian flag and chanted slogans in condemnation of the so-called “Caesar Act,” calling for standing as one to expel the occupation forces and prevent them from stealing and smuggling the country’s resources.

The locals burned the American flag, affirming that the Syrian flag is the only banner that should flutter in the sky of Syrians.

In statements to SANA reporter, citizens pointed out that they are participating in this stand as a confirmation of their rejection of the US and the Turkish occupation forces’ presence and to demand their immediate departure, voicing solidarity with their brethren in Qamishli countryside to expel the American invaders who came to steal oil and plunder the country’s resources without regard to any humanitarian law or international law.

Locals in Zibaneh village in Qamishli on Monday organized a national stand in condemnation of the coercive economic measures imposed on Syria, especially “Caesar Act,” and in rejection of the presence of the US and Turkish occupation forces. 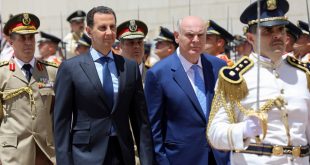