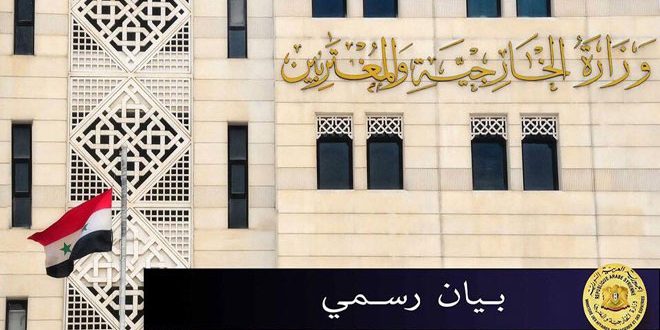 Damascus, SANA-Syrian Arab Republic expressed deep worry over means of blackmail, threat and pressures adopted by a group of western countries, particularly the US, Britain and France to pass a western resolution during the 94th round of the Executive Council of the Organization for the Prohibition of Chemical Weapons (OPCW).

“Russia, Iran and China have voted against the draft resolution, while 9 other states have abstained from supporting it as the resolution illegally targets the right of Syria, a member in the organization and a party in the Chemical Weapons Convention, which has fulfilled its commitments in light of its access to the Convention,” a statement by Foreign and Expatriates Ministry said on Monday.

The Ministry added that the Western decision was based on misleading conclusions prepared by the so-called illegal “Investigation and Identification team” regarding three alleged incidents about the use of chemical weapons in the town of Ltamenah in Hama province in March, 2017, in a report issued on April 8th, 2020.

Those incidents that were fabricated and carried out by terrorists of Jabhat Al-Nusra in cooperation with its arm “the White Helmets” funded and supported by the US, Britain, France and Germany.

It affirmed that the adoption of that decision represents a clear politicization of the organization’s work and it will deepen division among member states and it will consolidate a methodology for working inside the organization which aims at further manipulating in the texts of the convention according to the plots of these well-known countries.

The Ministry pointed out that the resolution will allow the US and some Western states to use that organization as a tool to make more fabrications against the Syrian Arab Republic and other states under the pretext of using the chemical weapons in order to achieve political purposes and known agendas.

It added that the resolution, at the same time, addresses an incorrect message that encourages the terrorist groups to do more fabricated chemical plays with the aim of accusing the Syrian State instead of seeking to mobilize the international efforts to confront those terrorist groups and eliminate them.

It went on to say that it has become well known to everyone that the terrorist groups, including the so-called “White Helmets” terrorist group, fabricate incidents of alleged use of chemical weapons, under the orders of their operators, after every heroic achievement and triumph by the Syrian Arab Army in its battles against terrorism across the Syrian territory.