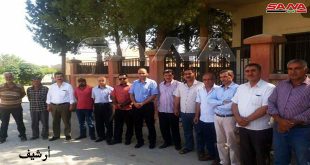 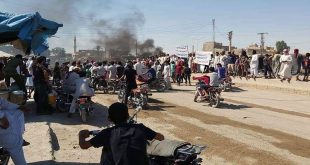 Hasaka, SANA- US occupation-backed QSD groups continued to prevent employees of the General Electricity Company of Hasaka and the Syrian Grain Corporation from entering their workplaces in Al-Nashwa and Ghuwairan neighborhoods after seizing the two buildings by force of arms.

SANA reporter in Hasaka said that for the 11th consecutive day, dozens of workers gathered in front of their workplaces, stressing the need to ensure offering services to the locals.

The workers are insisted to return to their work, the reporter said , adding that practices of “QSD” are provocative and aim to serve external agendas.

The workers renewed their determination to gather in front of their workplaces daily until returning to work, demanding QSD groups to get out from the workplaces, as they are service institutions.

Director General of Hasaka Electricity Company, Eng. Anwar Okla, affirmed that the workers will continue to implement the daily working hours in front of their headquarters until the entire building is restored , pointing out that these pratices by QSD negatively affected the workflow through impeding offering service to citizens.

A few days ago, the QSD groups blocked the access of flour to al- Baath bakery in Qamishli city , which caused a crisis and a difficulty to obtain the bread, In addition to stealing quantities of flour by force of arms and sending them to bakeries in areas of QSD control.