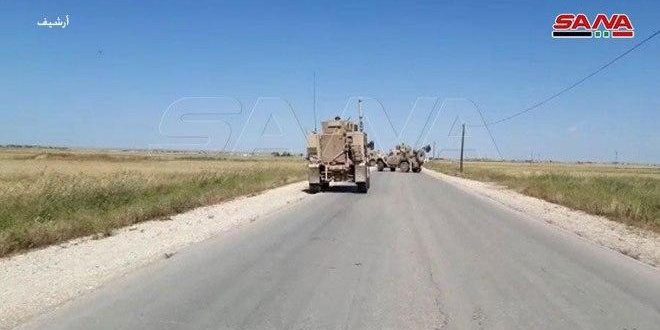 Deir Ezzor, SANA – A convoy of vehicles belonging to the US occupation forces was targeted by an explosive device while they were passing in al-Baseera area in Deir Ezzor eastern countryside.

Local sources told SANA reporter that the explosive device went off as a convoy consisting of several US military vehicles was passing near Issa al-Ossman gas station in al-Sabha village in al-Baseera area in Deir Ezzor’s eastern countryside.

The US occupation forces established several illegal bases in the Syrian al-Jazeera area, and conducting joint patrols with Qasad (SDF) groups which operate under the occupation’s orders. The US forces also keep bringing in convoys loaded with weapons and logistical and military equipment via illegal border crossings to strengthen their presence in the area so that they can continue to steal petroleum and other resources.

2020-07-03
hybah
Share
Previous Lavrov affirms necessity of vanquishing terrorism in Syria and resolving crisis politically
Next Total daily infections of coronavirus in the US exceed the threshold to 57 ,000