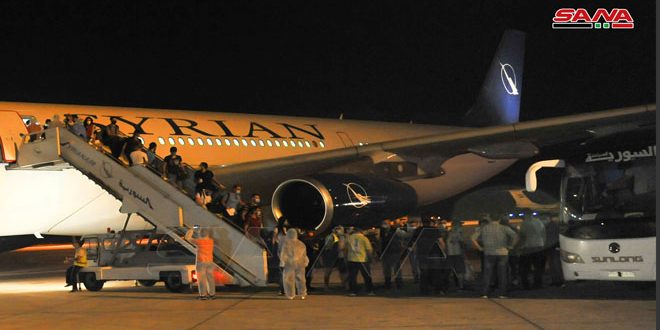 Damascus, SANA- The second batch of the Syrian students who study in India arrived in Damascus international airport on Thursday in addition to a medicine shipment to confront the coronavirus offered by the Indian government.

The 250 students came on a Syrian airplane. Speaking to journalists following receiving the shipment of medicines, Deputy Foreign and Expatriates Minister Fayssal Mikdad affirmed the deep-rooted bilateral relations between Syria and India which based on mutual respect, expressing the Syrian government and its people gratitude for this assistance, which comes at a time when some try to impose unilateral coercive measures on the Syrian people.

Al-Mikdad praised efforts made by the Indian authorities concerned in order to secure this aid, pointing out to the role of India and its stances in support of Syria in its battle against terrorism and in all international forums.

The Indian ambassador, Hifzur Rahman, explained that this aid is a shipment of drugs weighing ten tons, containing vaccines and medicines for treatment of coronavirus, hoping that this aid would contribute to the success of the Syrian government’s efforts in this regard.

The Indian ambassador stressed that his country has been and still supports the position of the Syrian government and its people in the war against terrorism in all its forms and manifestations, underlining its respect for Syria’s sovereignty and territorial integrity and its condemnation of terrorism which poses a great threat to all humanity. Damascus international airpor 2020-07-03
nisreen
Share
Previous Temperatures above average, misty weather in the eastern, al-Jazeera and al-Badia
Next Second batch of Syrian students in India arrive in Damascus and a medicine shipment to confront corona