Hasaka, SANA- For the 5th day in a row, US occupation-backed Qasad (QSD) groups continued to prevent employees of the General Electricity Company and the Grain Corporation from entering their workplaces in the neighborhoods of al-Nashwa and Ghweiran in Hasaka city.

Director General of the Electricity Company, Eng. Anwar Okla, called in a statement to SANA for allowing the employees to return to their work in the Company and to continue offering all services as usual, pointing out that the Company’s workshops continue their work, particularly in regard with repairing the damage of the energy transmission lines and switching centers

In the same context, SANA reporter indicated that QSD groups brought in military reinforcement to the Company’s headquarter to prevent the employees from entering it, adding that a number of workers at the Grain Corporation gathered at the opposite side of the Company after QSD Groups have tried to disperse them.

The reporter pointed out that the workers insisted to return to all their workplaces which have been seized and the need that all the US occupation-backed groups to leave the area, asserting that they will continue to stage daily sit-ins in front of their work places. 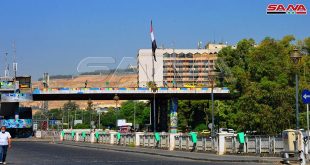