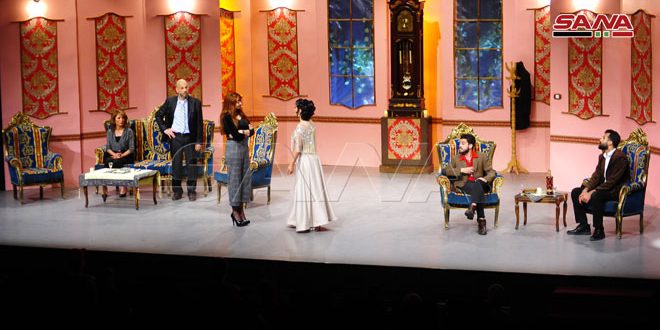 Damascus, SANA_ Al-Hamra Theater in Damascus has reopened its doors to the public after lifting the quarantine, imposed due to coronavirus, by presenting a two-day show entitled “Dangerous Curve”.

The show, which was previously staged at the National Theater in Aleppo, presents the story of a wealthy family and its close friends, whose relation seems to be strong, but suddenly it turned out to be fake and collapsed.

The hour and a half-show, which was written by British playwright GB Priestly in 1935, prepared by Hossam Kharbotli and directed by Hikmat Akkad, is produced by the Directorate of Theaters and Music.

” The work focuses on the lying and deception that takes place in every society regardless of the time or place.” The director Akkad said to SANA, clarifying that the work was widely welcomed by the audience.

Kharbotli, in turn, who also played the role of “Bassam,” said that the play started from a simple and major event that leads to revealing a number of other events and facts that escalate to show the extent of deception and lying to which the character of Bassam was exposed by other characters. This leads Bassam to commit suicide at the end.

Kharbotli added that presenting the show in several cities helps exchange experiences and ideas and contributes to the development of the Syrian theater.

Actress Mnissa Mardenly played the role of a beautiful young girl called Asil, who works for the wealthy family’s company and is forced to reveal a number of events that show her love for Bassam who is involved in the killing of his brother Matar.

Actress Nagham Kujak, who played the character of Zain, the sister of Bassam and Matar, said: “The play raises a social issue that focuses on lying in all its forms.”

Director of Al-Hamra Theater Mohamed Salem, stated that the return of the activities to the theatre through this show came with the efforts of its workers to implement precautionary and preventive measures against the Coronavirus, starting with sterilization and specifying the seats on which the public will sit according to the spatial distancing and measuring the audience temperatures and sterilizing their hands when entering the theater.