Trump threatens to use unlimited military force against demonstrations 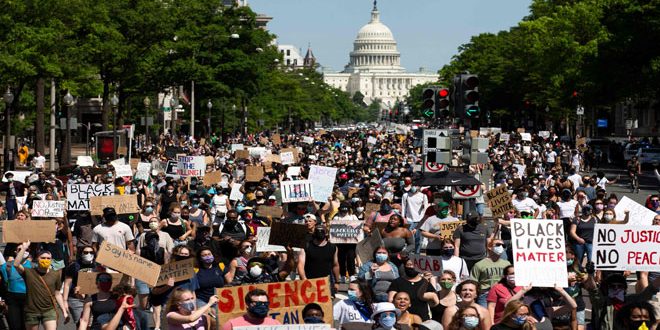 Washington, SANA- US President Donald Trump has threatened to use unlimited military force against demonstrations across the United States after a young American man of African origin was killed by police in the city of Minneapolis.

Trump justified in two tweets via his “Twitter” account yesterday his threat to suppress American citizens exercising the right to demonstrate and express by saying that ” Crossing State lines to incite violence is a federal crime” threatening that ” Governors and Mayors must get much tougher or the Federal Government will step in and do what has to be done, and that includes using the unlimited power of our, military and many arrests.”

Trump considered that 80 percent of the demonstrators in Minneapolis yesterday came from outside the state and said they were “hurting business.”

Trump indicated that the armed forces could deploy in Minneapolis very quickly if the local authorities requested it … while the Minnesota Governor summoned the state’s National Guard after several nights of confrontations in an unprecedented measure since World War II.

Hundreds of demonstrators took to the streets to protest in Minneapolis, Los Angeles, New York, Washington and a number of other cities yesterday after Trump’s threat and confrontations took place between the police and protesters in New York after the police ordered them to retreat on the pretext that these gatherings were illegal and a number of protesters were arrested.

The authorities imposed a curfew last night in Minneapolis, Los Angeles, Atlanta, Chicago, Denver, Philadelphia, Pittsburgh, Seattle, Cleveland, Columbus, Portland, Miami, Milwaukee and Rochester in New York, and the National Guard issued a statement on the putting the forces in the capital in a state of high alarm to maintain security.

Protests erupted in Minneapolis after the death of George Floyd, who appeared in a video while he was pinned to the ground by a white police officer who was pressing his knee into Floyd’s neck before the man died

Protests erupted in Minneapolis has been arrested and charged with murder after three nights of violent protests in the Midwestern US city.

Trump threatens to use unlimited military force against demonstrations across the United States 2020-05-31
ruaa-jazaeri
Share
Previous Russia hands over MiG-29 fighter jets to Syria
Next Temperatures to rise, weather relatively cold at night

The Hague, SANA- Permanent Representative of Syria at the Organization for the Prohibition of Chemical …