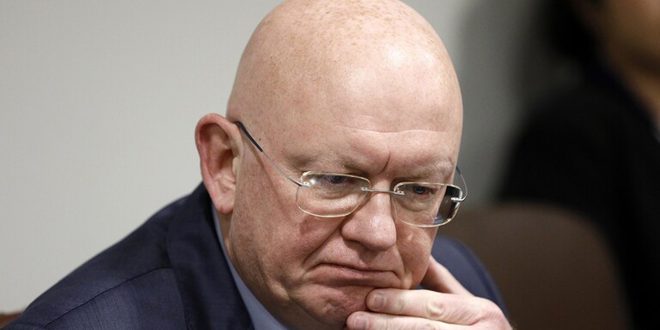 In a statement via video during the UN Security Council session on the situation in Syria on Monday evening, Nebenzia stressed that these measures harm the Syrian people and hinder the efforts of the Syrian government to confront the novel Coronavirus (COVID-19).

He clarified that the Coronavirus poses an additional challenge for the Syrian people in light of the unilateral coercive measures which caused damage to the economic and health sectors in Syria.

Nebenzia pointed out that the coercive measures impede the purchase of medical equipment and that international humanitarian NGOs cannot work effectively for fear of imposing sanctions on them.

He pointed out that the spread of the Coronavirus had an impact on the process of a political solution to the crisis in Syria, like other political processes around the world, indicating in this regard that the Syrian government and the Syrian people are working together to restore normal life.

On the situation in Idleb, Nebenzia talked about the terrorists’ repeated violations of the cessation of hostilities agreement and their continuous targeting of the Syrian Arab Army sites.

The Russian diplomat stressed the necessity of returning all areas to the authority of the Syrian state, explaining that the American forces are illegally present in the al-Hawl camp, al-Tanf area, and in al-Rukban camp.

“It is impossible to achieve security and stability in these areas unless they return to the state authority.” He said.

Nebenzia demanded providing answers about what is happening in northeastern Syria, where the American occupation forces are present, regarding fleeing terrorists to other countries.

The Russian official concluded by calling for helping Syria in the reconstruction and the political process for reaching a solution to the crisis between the Syrians themselves without external interference.