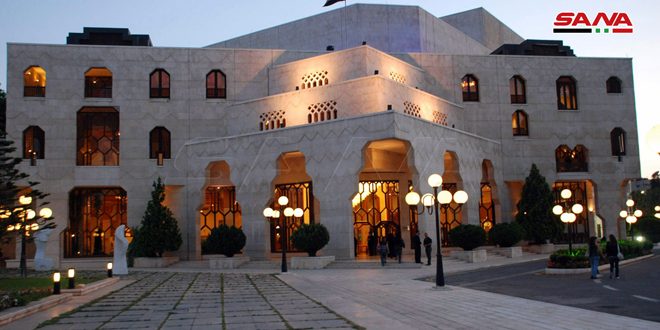 Damascus, SANA_ In central Damascus, the Syrian capital, a Syrian cultural and artistic monument is located to form, together with Al-Assad National Library, the Higher Institute of Music and Performing Arts, and the Ballet School, the cultural heart of the oldest inhabited capital in the world.

During the terrorist war on Syria, the cultural, musical, theatrical and other cultural activities did not stop, despite the fall of the terrorist attacks that claimed the lives of the innocent people of the opera workers and visitors, in a real defiance of the death.

Dar Al-Assad for Culture and Arst, (Damascus Opera House) was created according to the Legislative Decree No. 19 of 2003 and was inaugurated on May 7, 2004.

It performs many tasks such as spreading, developing and upgrading musical and theatrical culture, reviving folk, social and artistic heritage, introducing society to the international musical arts and developing the artistic taste of the public in addition to encouraging the national creativity movement.

Regarding the architectural style, the house is a unique block with the Institute of Music and Performing Arts and the Ballet School with a multifunctional interior courtyard where the ancient and modern oriental architecture of Damascus are combined.

Dar Al-Assad exhibits a group of works of art in its halls and offices, in addition to sculptures by well-known artists in Syria.

The Opera hosted in 2008 the most important ceremonies in Damascus as the capital of Arab culture, including a show by the legendary singer Fayrouz.

Today, in these exceptional health conditions witnessed by all countries of the world, and with the halt of cultural and musical activities, the Opera, although it works every year to program its annual vision to provide the best to audience, it has worked with flexibility to change her plans to keep pace with the technical developments of the era to stay close to its audience.

It broadcast the concerts held online and produced music compositions in a new technical method during the quarantine period with the hope that the coming days will witness a creative cultural movement taking into account health conditions.

Hama, SANA- A civilian was injured in a blast of a mine left behind by …