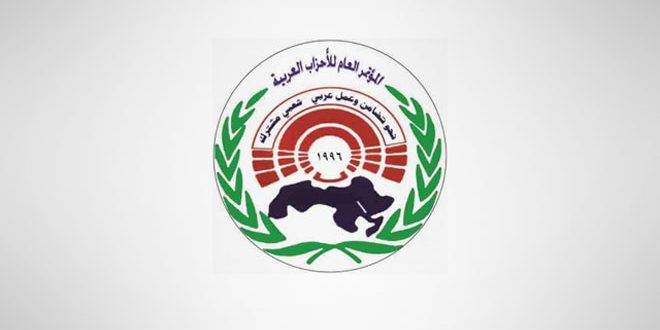 Amman, SANA_ The General Secretariat of the General Conference of the Arab Parties condemned the decision of the German government to consider the Lebanese Hezbollah party as a terrorist organization, stating that this decision confirms Berlin’s submission to American and Zionist dictates.

“This decision, which was issued at a suspicious time, carries within its folds the plan to target Lebanon as a whole, especially that Hezbollah is a fundamental component of the Lebanese people and expresses the aspirations and confidence of the Lebanese”, the General Secretariat said in a statement on Sunday.

The General Secretariat shouldered the German government responsible for the consequences of this decision at all levels.

In its statement, the General Secretariat stressed its rejection of any targeting of the resistance, reiterating its support for the role of Hezbollah, which supports Arab rights, and its role in combating terrorism.

The statement also called for condemning this decision, as it represents a dangerous precedent that requires confronting and facing it in all forms.

The General Secretariat of Arab Parties has been based in the Jordanian capital, Amman, since the first general conference of Arab parties was held in 1996.

Damascus, SANA- Israeli occupation troops arrested on Wednesday a Palestinian in the city of Hebron …