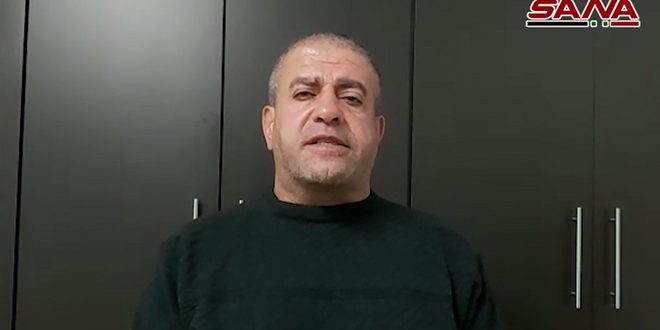 Damascus, SANA_ The freed captive Sedqi al-Maqt added his voice to the civil societies including non-governmental organizations (NGOs) and Syrian figures in the campaign “Lift the Siege on Syria” calling for lifting unilateral economic coercive measures imposed on the Syrian people, especially those related to the health aspect, in light of the spread of the Corona epidemic in the world.

In a statement to SANA on Friday, al-Maqt demanded the lifting of unilateral economic coercive measures imposed on the Syrian people, especially those related to the health aspect in light of the spread of the Coronavirus epidemic in the world.

“I am announcing my support for the Syrian civil society campaign entitled” Lift the sanctions imposed on Syria. Syria, which has achieved victory over the US terrorism and western colonialism’s tools and which fights the coronavirus with professionalism and efficiency, will inevitably overcome this western colonialist embargo,” he said.

He also urged all peoples of the world not to believe America’s lies that it defends humanity and world peace and it is against terrorism and that it fights Coronavirus.

Al-Maqt saluted all the peoples and governments that stand in the face of Western colonialism, and the Syrian organizations and societies that raise the voice of the Syrian people and the Syrian civil society.