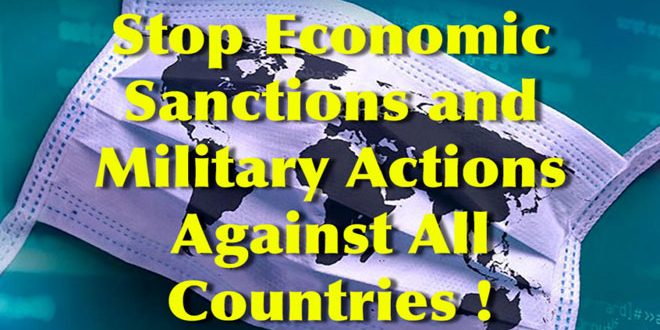 New York, SANA_ The US Peace Council called on the US administration and the United Nations to immediately lift unilateral coercive economic measures imposed on more than thirty countries, including Syria, especially after the global outbreak of the Coronavirus and its devastating impact.

In an open letter on Saturday published on its website in several languages, including English, Spanish, French and Arabic, the council stressed that the global outbreak of the pandemic shed light on the illegal and unethical practice of imposing coercive and unilateral economic measures by the United States against more than thirty countries.

It described these sanctions as “economic war” and crimes against humanity, as the targeted countries suffer in light of the devastating impact of the global epidemic, especially Iran, Syria, Venezuela, Cuba and Zimbabwe.

The council also called on the US government to respect international law and immediately end economic sanctions imposed on all targeted countries and immediately cancel the freezing of financial assets and bank accounts of these countries so that they can buy and receive food, medicine, medical equipment and supplies necessary to combat the Coronavirus.

It also demanded stopping all threats and military actions against these countries, including the removal of the US warships sent to Venezuela under the false pretext of “the war on drugs”.

The council urged the UN Secretary-General and UN leading bodies to abide by the articles of the Charter of the International Organization, calling on the Security Council to lift all sanctions also imposed by the United Nations on a number of countries.