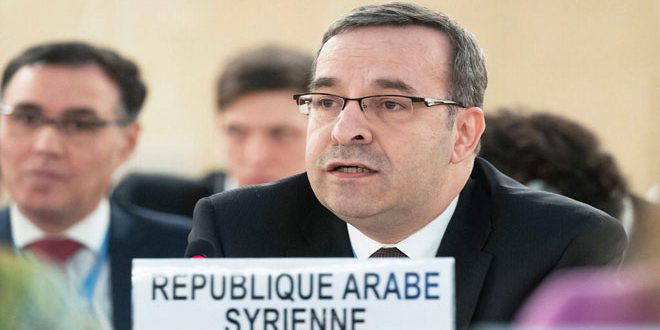 Geneva, SANA_ Syria has condemned the systematic violations committed by the Israeli occupation authorities, which affect the human rights of the Syrian citizens in the occupied Syrian Golan, in a violation of the relevant United Nations resolutions and the provisions of the Fourth Geneva Convention of 1949.

That was included in a letter directed Friday by Syria’s Permanent Representative to the United Nations in Geneva Ambassador Hossam El-Din Ala to the head of the Special Committee to Investigate Israeli Practices Affecting Human Rights of Palestinian People and Other Arabs of Occupied Territories.

Syria demanded paying more attention to the situation of the human rights in the occupied Syrian Golan and contributing to broadening the base of international condemnations of the violations committed by “Israel” against the Syrian citizens in the occupied Golan.

The ambassador warned against the escalation of Israeli settlement activities, the looting of natural resources in the occupied Golan and violations of the rights of Golan’s citizens in light of the unlimited support and encouragement that Israel receives from the current US administration to continue its illegal policies and practices and protecting it from international accountability.

The Syrian diplomat referred to reports issued by the United Nations Secretary-General and the Director-General of the International Labor Organization, highlighting discriminatory practices and unfair restrictions imposed by the Israeli occupation authorities on the Syrians in the occupied Golan.

He added that the reports confirmed the illegality of establishing and expanding the Israeli settlement blocks and the transfer of the population to the occupied territory.

Ala also warned of the danger of Israeli attempts to seize natural resources in the occupied Syrian Golan and the property of Syrian citizens under various pretexts, including its attempts to impose so-called alternative ownership documents and plans to establish wind turbines project to generate electricity on lands owned by the Syrians.

The ambassador reiterated Syria’s rejection of attempts to consolidate the Israeli occupation of the Syrian Golan and its condemnation of the occupation authorities’ breach of international law and relevant Security Council resolutions, calling on the United Nations and member states not to recognize any legal status stemming from the activities of the occupier.

He also called for ceasing to provide any assistance to the Israeli occupation, especially in the business, commercial and tourist activities, and obligating it to stop the illegal settlement policies and repressive measures against the Syrians living in the occupied Syrian Golan and to end its occupation.