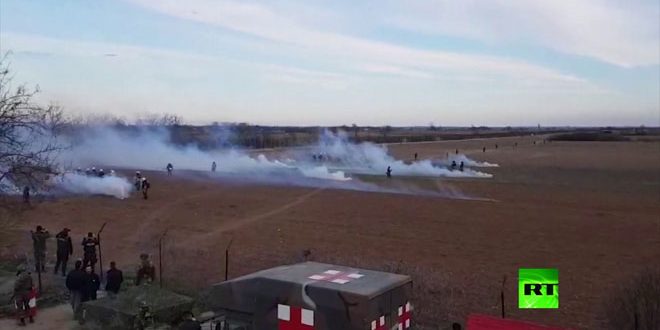 Damascus, SANA- Several media reports have highlighted the “malicious intentions” of the Turkish regime to exploit the issue of migrants on its territory to blackmail the European Union, achieve political gains and to cover the repercussions of its aggression on Syrian lands.

The Russian newspaper Izvestia stressed in a report on Thursday that the regime of Turkish President Recep Tayyip Erdogan is using the Syrians, who have been displaced due to terrorism, as a card to pressure the European Union and blackmail its countries.

To do this he has opened the Turkish borders for the displaced to cross into Europe and manipulated their numbers, the newspaper said.

Russian military expert Vladislav Shurygin mentioned that Erdogan’s regime has exaggerated the number of the refugees in order to force Europe to assist it in its aggression on Syria, to receive more funds and to pressure Russia through international organizations aiming at stopping the counterterrorism process in Idleb.

German politician and Member of the Security and Defense Committee at the European Parliament Lars Patrick Berg said that the European Union should say “No” to Erdogan’s blackmail attempts and should consider these attempts as an attack on its sovereignty and security.

He also called for imposing new sanctions on Turkey over its blackmail bids.

The “American Conservatives” newspaper criticized Erdogan’s contradictory policies in Syria which engaged his country in a costly war that is doomed to failure.

It pointed out that the agreement reached between the European Union and Turkey in 2016 was wrong, because it has been proven that Turkey was exaggerating the number of the refugees on its land and stealing their money and now Erdogan again puts the Europeans before difficult options.

Observers see that, through using the refugee file to pressure Europe, Erdogan is trying to ease his internal crises following his aggression on Syria and to deviate attention away from the losses of his troops in Idleb governorate.

The observers clarified that Erdogan recently opened his country’s borders with Europe to thousands of refugees after he repeatedly failed in convincing his western allies to assist him.

Other experts and diplomats described Erdogan’s recent threats regarding the refugees as “nothing but an attempt to alleviate the repercussions of his forces’ losses in Syria and a bid to get concessions from the European Union, thereby receiving $10 billion to fund his aggression on Syria.”

In addition to using the refugee crisis as a card to achieve his goals, Erdogan has also backed different terrorist organizations in Syria by funding and arming them.

He also cooperated with the terrorists in stealing Syria’s oil resources, antiquities and factories in the north of the country. 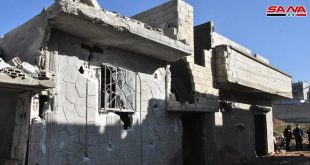 Hama, SANA- A military source affirmed that the Israeli air aggression that targeted Hama on …