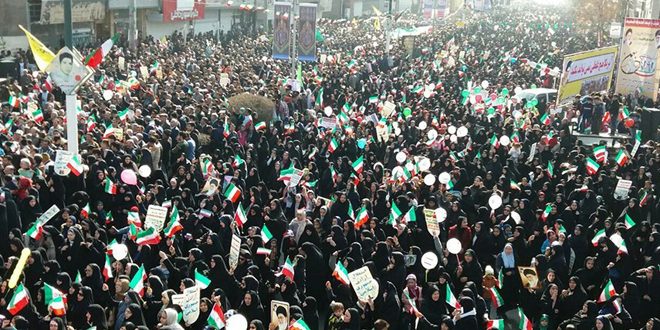 Tehran, SANA- Millions of Iranians took to the streets in all the Iranian provinces and cities to celebrate the 41st anniversary of the Islamic Revolution victory in Iran with the participation of senior Iranian officials.

Participants in the march raised the Iranian national flag and the flags of the resistance axes countries of Syria, Lebanon, Iraq, Palestine and Yemen, chanting slogans in condemnation of the US and the Israeli occupation entity.

They stressed commitment to the principles of the Iranian Revolution and the national resistance, and to Iran’s national sovereignty and dignity.

2020-02-11
hala
Share
Previous Kremlin: Terrorist attacks launched from Idleb unacceptable and should not be allowed to continue
Next Atrocities ignored by int’l community, US drones killed thousands in many countries