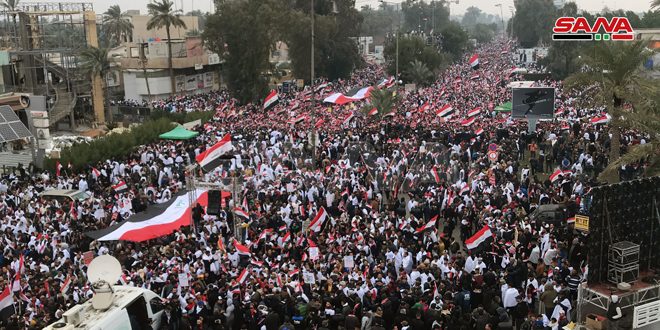 Baghdad SANA_ Huge crowds of Iraqis demonstrated in Baghdad on Friday to demand the ouster of US troops from the country.

The demonstration set off from al-Jadriyah and al-Karrada regions adjacent to the Green Zone in central Baghdad.

The demonstrators raised the national flags, chanted slogans rejecting the US presence on Iraqi soil and denounced the criminal actions committed by the US administration by targeting Iraqi military forces and resistance leaders.

Meanwhile, the Iraqi security forces have taken strict measures and cut a number of roads in central Baghdad in coincidence with the start of the massive demonstration, according to an Iraqi security source.

In statements to SANA correspondent in Baghdad, a number of demonstrators confirmed that the US military presence is the cause of all the dilemmas that Iraq is witnessing.

They demanded the immediate implementation of the Iraqi Parliament’s resolution which call for the expulsion of the US and foreign forces from all Iraqi lands.

This demonstration, according to demonstrators, represents a real popular referendum on the rejection of any US military presence in the country.

On January 5, the Iraqi parliament voted overwhelmingly in favor of a resolution bending the government to end the foreign presence in the country after the US crimes against Iraqi military headquarters and high ranking Iraqi and friendly resistance leaders.