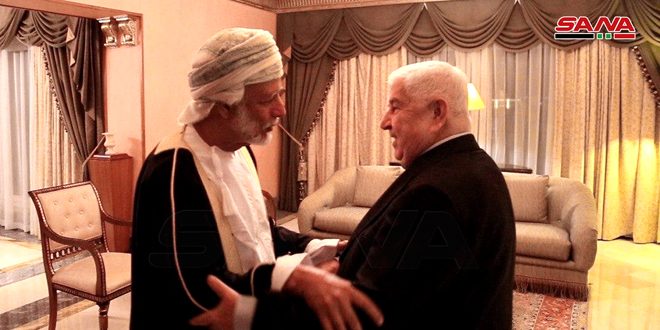 Minister al-Moallem, on behalf of the Syrian Government and people, offered deep condolences on the death of Sultan of Oman Qaboos bin Said, hailing the great role which he had played in enhancing relations between the two brotherly countries.

Al-Moallem expressed confidence that the Sultanate of Oman will continue its progress and prosperity under the leadership of Sultan Haitham bin Tarek bin Taimur.

Viewpoints were identical regarding the tackled issues during the meeting as both sides underlined the importance of continuing coordination and joint work to face and overcome those challenges.

He reaffirmed the Omani leadership’s confidence in the ability of the Syrian leadership and people to overcome this war and to restore security and prosperity to their country.