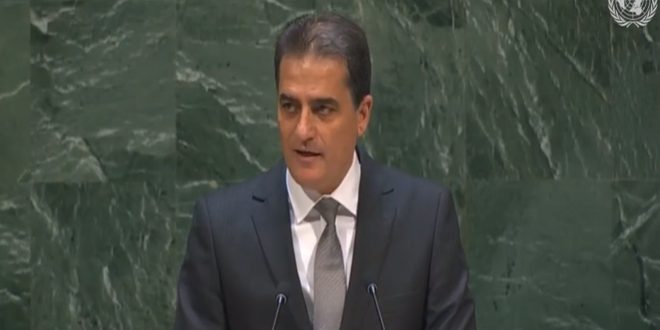 New York, SANA- The UN General Assembly overwhelmingly demanded that Israel withdraw from the entirety of the occupied Syrian Golan up to the June 4th 1967 line in compliance with relevant Security Council resolutions.

The Assembly on Tuesday cast a majority vote in favor of a resolution titled “Syrian Golan,” under the article “The Situation in the Middle East”, reemphasizing the principle of the inadmissibility of acquiring lands belonging to others by force as per international law and the UN charter, in addition to reemphasizing that the Geneva Convention relative to the Protection of Civilian Persons in Time of War.

Fallouh stressed that Syria will not abandon its right in restoring its occupied land by all means preserved by the Charter and the principles of the international law and the UN resolutions.

Syria condemns in strongest terms the decisions of the U.S. administration as a flagrant violation of the international law, the UN Charter and its relevant resolutions, Fallouh reiterated.

He added that Syria considers these decisions as unilateral action taken by a party that has no political, legal or ethical capacity to decide the fate of the world’s peoples or to deal with a land that it doesn’t possess, but it is a part of the territories of the Syrian Arab Republic.

He said that the blind support provided by the governments of a number of UN member states has encouraged Israel to continue its violations of the International Law and the provisions of the UN Charter as Israel has launched repeated acts of aggression on the Syrian territories and on the territories of the neighboring Arab countries.

Fallouh asserted that Israel has continued its attempts to change the history of the occupied Golan, loot its archeological antiques and resources, in addition to its attempt to impose demographic change in it through usurping its lands to expand its settlements.

Fallouh underlined Syria’s firm and principled stance on supporting the right of the Palestinian people in their right of self-determination, establishing their independent state with Jerusalem as its capital and restoring the Palestinians right to return based on the UN resolution no. 194 for 1948, and Syria’s demand to grant Palestine a full membership at the UN, calling on the UN to immediately implement its resolutions to end the Israeli occupation of the Arab lands.