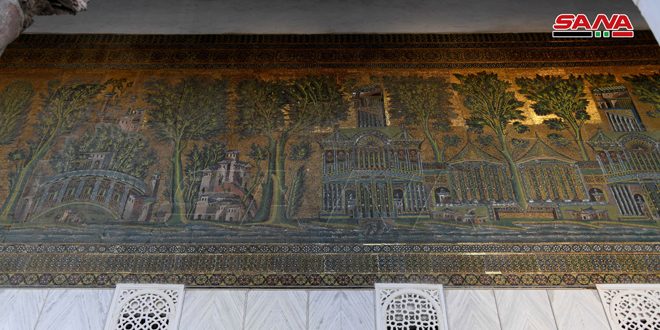 Damascus, SANA_ The mosaic pieces that adorn entrance of the Great Umayyad Mosque are intertwined to embody Barada River and Ghouta of Damascus through the largest mosaic panel existed in the mosque in which the stone pieces were regularly aligned to narrate history of the oldest inhabited capital in the world, Damascus .

The portico of the Great Umayyad Mosque is adorned by this panel that was inspired by the ancient Syrian architecture. It embodies the iconic Barada River that crosses Damascus city and its green belt known as Ghouta.

The creativity of the Syrian artisans in the Umayyad era is reflected in this panel that contains geometric and vegetable shapes made by the ancestors, and preserved and restored by their grandchildren.

Deputy Director General of Antiquities and Museums,Nazir Awad, told SANA that Barada Panel is considered as one of the most important Umayyad arts in which the craftsmen of Damascus put all their artistic and decorative expertise.

It was put to adorn the main entrance in the eastern side of the mosque when it was built in 705-715 AD.

Barada Panel, 34.5 meters long and 7.15 meters high, is characterized by several technical features, the most important of which is its large size with an area of 247 square meters and its artistic style, which was common in mosaic drawings that spread in Syria before Islam, in addition to the method of automatic photography in mosaic painting, which became the basis for painting methods in all Islamic times.

This panel, which was covered by a limestone cover by the Ottoman occupation, returned again to adorn the portico of the Umayyad Mosque in 1929 after the cover was removed.

The Panel depicts a landscape with rivers, trees, architectural structures and agricultural environment in Damascus to reflect the flourishing life in Damascus.

Barada Panel Umayyad Mosque 2019-12-01
ghossoun
Share
Previous Cultural bullying among generations in “Kompars” theatrical show
Next FM: Any opinions, statements by Washington or others will not affect work of Committee of  Discussing Constitution 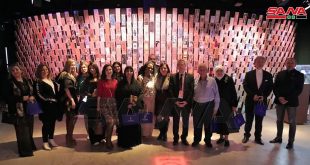