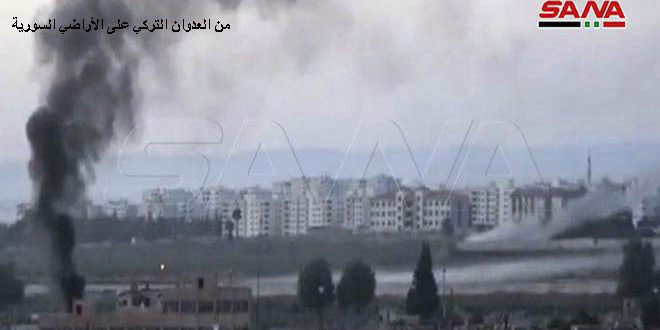 SANA reporter said that “forces of the Turkish occupation and its mercenaries of terrorists launched a fierce attack with various types of artillery and rocket shells on residential neighborhoods in Ayn Issa town in the northern Raqqa countryside, causing considerable damage to citizens’ property, public facilities and infrastructure.”

The reporter added that the violent attack led to the displacement of people for fear of committing massacres against them.

In the same context, local sources said that Turkish occupation forces are setting up what seems to be a new base for them 4 km east of Ras al-Ayn, with military engineering vehicles flattening the terrain and setting up dirt barriers.

Local sources also said that tens of families headed from Turkey to Ras al-Ayn, many of whom are dressed in the Afghani fashion that Daesh (ISIS) terrorists adopt, and a large number of them settled in the southern part of the city.

The sources reported that terrorists under the command of the Turkish occupation forces abducted two civilians from al-Mubarakia village in Abu Rasain area.

On Friday, a number of civilians were martyred and others were injured in a new attack by the Turkish occupation and its mercenaries from terrorist organizations on the countryside of Ras al-Ayn in parallel with the Turkish regime’s continued reinforcement of positions of its occupying forces on Syrian territory by sending logistic materials.