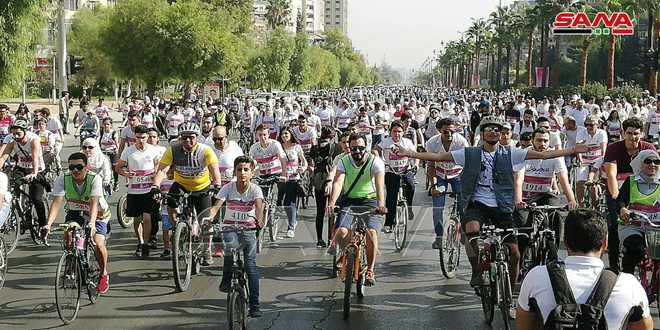 Provinces, SANA- A marathon to raise awareness about the early detection of breast cancer was held on Friday in Damascus, Aleppo, Lattakia , Homs , and Sweida under the title of “You can triumph over Cancer” with the participation of thousands of volunteers from civil societies , youth, and economic initiatives.

The marathon, which was organized by National Committee for Cancer Control, will last till the end of the current month as it comes within the Global month for raising awareness on this disease.

In Damascus ,more than 5,000 volunteers participated in the marathon which was kicked off from al-Jalaa Sports city in Mazzeh in Damascus towards al-Akram Mosque.

Head of Ataa team (Volunteerism) , Hani al-Asali told SANA that the marathon is a part of the national campaign to raise awareness about early detection of breast cancer , which was started in October , the month of global awareness of the disease.

In Sweida province, the marathon was launched from al-Mal’ab square, while it started from al-Sa’a al-Jadeida square in Homs , the government Square in Lattakia, and Bab al-Qal’a in Aleppo.

2019-10-18
shaza
Share
Previous SANA reporter: A Turkish aggression with artillery  on the villages of Lazka, Abbah, Maraikiz, Bab al-Khair and Sheikh Hussein Tomb in Ras al-Ayn countryside, infiltration of Turkish occupation groups into them
Next The army hoists national flag on public institutions in Ayn al-Arab