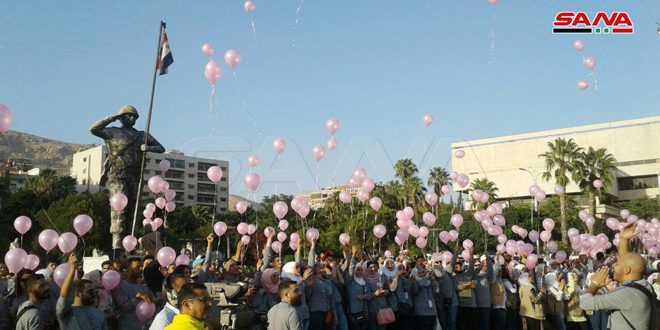 Damascus, SANA- About one thousand volunteers from civil societies and initiatives on Tuesday participated in a national campaign for the early detection of breast cancer which was launched from the Umayyad Square.

The campaign is organized by the National Committee for Cancer Control and it will last till the end of October.

Participants in the campaign released bunches of pink balloons in the air in declaration of starting the campaign which is held under the slogan “You can Triumph over Cancer”, and they distributed brochures and leaflets on the early detection of cancer. 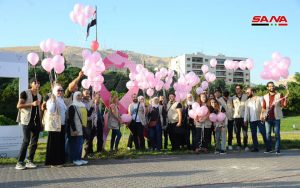 The national campaign comes in coincidence with and it will be carried out at centers and hospitals affiliated to the Health Ministry and Higher Education Ministry, the Interior Ministry and the Defense Ministry, in addition to civil centers. 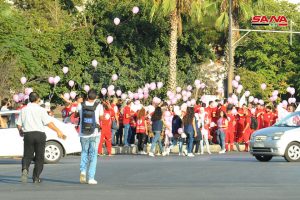 SANA’s camera met a number of the participants in the campaign as Head of the National Committee for Cancer Control Dr. Arwa al-Azma said that the campaign targets all women over 40 and the women who have risk factors to make the required checkups and for the early detection of any breast lesions including breast cancer in a way that guarantees the success of the treatment and the recovery.

Al-Azma noted that the number of women who will be covered by the radiological examination through the current campaign is estimated at about 35 thousand women, adding that according to the results of the previous campaign about two thousand women were suspected to have breast cancer.

For her part, Anatomy Doctor, Member of the National Committee for Cancer Control Lina Asaad expected that the number of the centers which are participating in the campaign will reach up to one hundred governmental and civil centers and the will receive all women over 40. 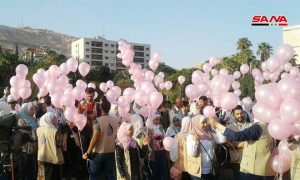 Director-General of al-Bairouni Hospital Dr. Rateb al-Naqari said that the hospital annually participates in the campaign, adding that the early detection of breast cancer increases the recovery rate to 95 percent, in addition to its role improving the quality of the life of women who have breast cancer and reducing the costs of the treatment.

Dr. al-Naqari underlined the importance of making checkups for all women over 30 in case they have risk factors.

Chairman of the Syrian Society for Breast Diseases Dr. Nouri al-Mudares said that the society have been carrying out an awareness campaign since the year 2006, referring to the increase in the social awareness on the importance of the early detection of the disease.

Al-Mudares added that through the previous campaign there was a notable increase in the number of women who defeated their fears and visited health centers which proves that the campaign was effective and it significantly contributed to raising awareness on the early detection of the breast cancer.

Breast cancer is one of the most common type of cancer among women on the international level as about two million new cases of cancer are registered annually according to the figures of the Global Fund, while on the local level it constitutes 30 percent of the cancers which women suffer from according to the national cancer record at the Health Ministry.

The awareness campaign last year which was launched at the centers and hospitals which are affiliated to the Health Ministry reached about 250 thousand women while mammogram was made for 8500 of them.

2019-10-02
ruaa-jazaeri
Share
Previous One thousand volunteers participate in national campaign for early detection of breast cancer
Next Larijani: Dialogue is only solution to crises in Syria and Yemen