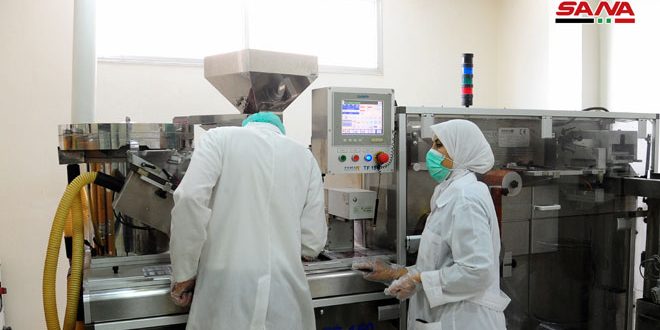 Damascus, SANA- A series of steps have been taken so that Arab Medical Company “TAMICO can return production as it was before where all the damaged production lines and laboratories in al-Mliha area due to terrorism, have been rehabilitated, as well as  a study to establish factories for new quality medicines to meet the demands of the local market.

Director of TaMICO company Fidaa Ali said that the company seeks to specialize in imported  pharmaceutical industry, which cost large sums of money.

He said that a meeting carried out by TAMICO and Assistant Minister of Health for Pharmaceutical Affairs, which included a study to establish a laboratory for producing cancer medicines,  and one for Surgical anesthesia, in addition to establishing four factories specialized in the production of dialysis filters and vaccines for children, baby milk from the age of one day ,and children’s food,  in cooperation with Foreign companies in friendly countries, including Russia , China , and India.