Army repels an attack by terrorist groups, destroys a number of their vehicles in Idleb countryside 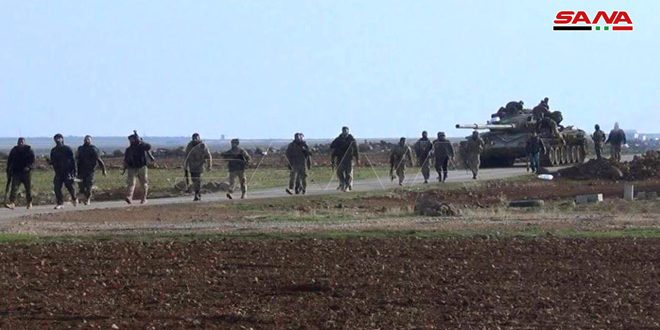 Idleb, Hama, SANA-Army units have repelled a fierce attack launched by terrorist groups on military posts which work on protecting the village of al-Qasabyia in Idleb southern countryside after violent clashes, in addition to destroying a number of vehicles belonging to Jabhat al-Nusra terrorist organization and the affiliated organizations.

SANA reporter said that army units engaged in violent clashes with terrorist groups which had launched an attack in the direction of al-Qasabyia village in Idleb southern countryside  which has been recently liberated by the army .

The reporter added that the terrorist groups used suicide bombers and several armored vehicles in the attack.

The clashes ended by foiling the terrorist attack and killing a  number of suicide bombers  before reaching their targets, in addition to destroying two armored vehicles and a PMP and killing a number of terrorists and injuring others.

The reporter indicated that the attacking terrorist groups fired a number of rocket shells on Mharda city and Jourin town in Hama northwestern countryside, causing only material damages.

The reporter added that army units retaliated to the attack through targeting the areas from where the rocket shells were fired, destroying a number of rocket launchers and fortified positions belonging to Jabhat al-Nusra terrorists and the “Turkistani Party” in al-Hwaija, Dwair al-Akrad and al-Sirmanyiah in the far northwestern Hama.

2019-07-21
ruaa-jazaeri
Share
Previous SANA reporter: A shell falls over a car in Sasa area in Damascus southwestern Countryside causing martyrdom of the driver and a girl, in addition to injuring three women
Next Al-Moallem starts an official visit to Belarus upon an invitation by its Foreign Minister