Sabbagh: OPCW report on allegations of chemical weapons use in Douma distorts facts and ignores testimonies of witnesses 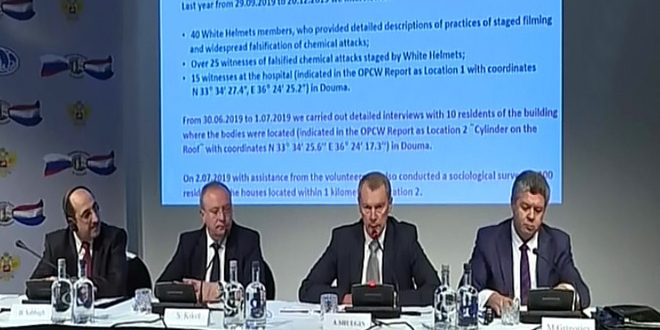 The Hague, SANA – Syria’s Permanent Representative to the Organization for the Prohibition of Chemical Weapons (OPCW) Bassam Sabbagh on Friday said that the OPCW report on the allegations of the use of chemical weapons in Syria lacks credibility and objectivity and distorts facts.

In a joint press conference with the Russian mission at the OPCW held at The Hague, Sabbagh said that fact the emergence of such allegations about the use of chemical weapons in Syria came after Syria succeeded in completing the elimination of its chemical weapons program, and after the victories achieved by the Syrian government against terrorist groups, which enabled it to regain control over large areas of Syrian territory.

He said that in order to clarify the truth about these allegations, Syria responded positively to the initiative of the Director General of the Organization to establish a Fact-Finding Mission (FFM) to gather information on these allegations and to confirm whether chemical weapons or toxic chemicals were used or not.

Sabbagh noted that since the issuance of the first FFM report, Syria has repeatedly expressed its grave concern over the modalities and methodology of the work of the FFM team, and on several occasions, has sought to work with the Technical Secretariat to fix those shortcomings and avoid any gaps.

“There are also open questions about the compatibility of the FFM’s activities with the rules of the Chemical Weapon Convention CWC, especially when it comes to the issue of visits locations, sampling, interviewing witnesses and cooperation with the relevant State Party which is not respected by the FFM Team,” he added.

Sabbagh went on to note that the final report of the FFM on the alleged incident in Douma has given rise to considerable concerns in many countries, and among international research centers and independent experts, related to technical, professional and legal aspects which have affected the credibility of that report.

“Let me highlight here some of these concerns: The report contained a serious distortion of facts on the ground, and a lot of discrepancies and inconsistencies, and lack of credibility of some witnesses, and absent of material evidence and chain of custody for the samples,” he said, adding that there was a selective selection of the witnesses, as only 7 out of 15 witnesses who appeared in the videos published about the incident were interviewed inside Syria, while the 26 witnesses whom were interviewed outside of Syria, and their relation with the incident was not known.

“Plus the double standards in dealing with testimonies of witnesses, between those who were interviewed inside Syria and the others who were interviewed outside Syria,” he went on to say, adding that politicization appeared clearly in the report by signaling some indirect hints against the Syrian Government while totally ignoring the role of the “white helmets” the arm of Jabhat al-Nusra and other terrorists organizations who played special role in implementing the agenda of the countries who were behind the whole war against Syria, in particular, using this incident as a pretext to justify the aggression of the USA, France, and the UK on the territories of Syria on 14 April 2018 which constitute clear violation of international law and the UN Charter.

Sabbagh asserted that neutrality and objectiveness were totally absent in the report Which ruled out completely the terrorist armed groups possession of toxic chemical materials, adding “For example the report conclusion referred to the two cylinders containing chlorine and used as a weapon in the incident, but similar cylinders were found in the warehouse of the terrorists in Douma, but the FFM team neglected this important fact.”

He said that the delegation of Syria, along with other delegations including the Russian, requested the Technical Secretariat of OPCW to organize a general briefing on this report with all members of the Fact-Finding team who investigated in Douma. However, attempts by some States impeded such discussion.

“Regrettably the Technical Secretariat responses to the written questions submitted by Syria and Russia on 11 March 2019 concerning many elements of the Douma report were too general, vague and superficial and have not provided any deep and scientifically convincing responses,” he added.

Sabbagh pointed out that the leaked report of one of the FFM members, Mr. Jan Henderson, cast further doubt on the credibility of the final report on the Douma incident, and clearly demonstrated the validity of the views expressed by several delegations in the OPCW.

He said the importance of Henderson’s report is based on a fundamental point that the two chlorine cylinders fund in the two locations in Douma were placed manually, and this unequivocally proves that the alleged incident of the use of chlorine as weapon in Douma was fabricated.

“Mr. Henderson was not alone in this opinion. The findings of the study by a British working group on Syria, headed by Professor Pearce Robinson recently published on its website, reached the same conclusion. Interviews and articles published by many researchers and international media such as David Miller, Robert Fisk, Caitlin Johnston, and others spoke in the same direction,” he added.

Sabbagh said that Syria strongly believes that the common objective of the States parties and the Technical Secretariat of OPCW is to maintain the professionalism and credibility of the work of the Organization, and therefore Syria calls upon the Technical Secretariat of the OPCW to reconsider its position, and reevaluate its investigations to clarify the truth regarding the Douma incident In the light of the different views expressed by a number of states, the report of investigator Henderson, and the review of other scientific studies and analyses.

“I want to indicate that Syrian Arab Republic has repeatedly requested discussions with the Technical Secretariat to review the terms of reference of the work of the FFM, in order to make the modalities and methodology of its work transparent and fully consistent with the Convention’s standards,” he said.

“I want to reiterate that the Syrian Arab Republic provided the utmost cooperation to the FFM, and hoped that by facilitating the FFM’s work, it will conclude with logical and objective finding, and not be subject to any kind of pressures exerted by certain countries. Here I want also to stress that Syria has fulfilled its obligations under the convention and will continue its cooperation with the Technical Secretariat of the OPCW,” Sabbagh concluded.

For his part, Russia’s Permanent Representative at the OPCW Alexander Shulgin said that the OPCW’s report on the alleged use of chemical weapons in Douma used information provided by terrorists via social media sites and ignored testimonies of witnesses in the Hague about the incident, and that the report contains a lot of gaps and contradictions.

“We requested that the OPCW to hold a press conference to get more answers to our questions, and our request was rejected,” he said.

Shulgin pointed out to some of gaps in the report, as analysis and investigation confirmed that the hole allegedly caused by a cylinder containing chemicals in the one of the sites in Douma was caused by a landmine blast and expanded manually, and that the cylinders had been delivered by hand and were not thrown out of a plane, which proves that what took place there had been staged.

He said that the FFM follows the orders of the United States, and this politicization is a deviation from its mission.

allegations on the use of chemical weapons in Douma city Syria's Permanent Representative to the Organization for the Prohibition of Chemical Weapons(OPCW) Bassam Sabbagh 2019-07-12
shaza
Share
Previous Ala: Britain is a direct partner in aggression on Syria
Next Army foils al-Nusra terrorists’ attack in direction of al-Hamamiyat in Hama countryside