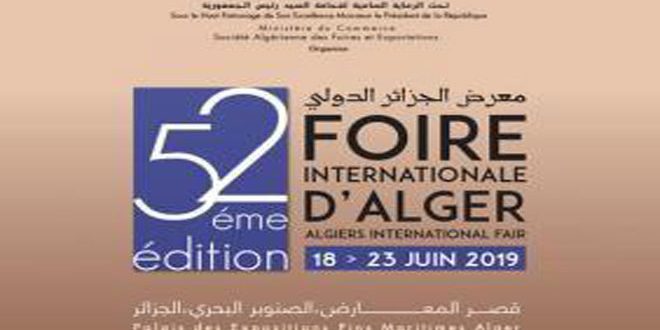 Algiers,  SANA – Syria participates Algiers International Fair held in the Algerian capital city under the title “Algeria Economic Diversity, Opportunities for Expected Partnership,” along with many states, the most prominent of which China, Cuba, Brazil, Indonesia and Germany.

During the opening of the 52nd session of the Fair, the Algerian Interim President Abdelkader Bensaleh visited the Syrian pavilion and other pavilions and the participating foreign companies.

He affirmed Algeria’s willingness to enhance cooperation with the economic institutions of different states and to expand the spheres of partnerships with them.

500 local and foreign companies and institutions from 15 states participate in the  Fair which will last till June 23rd.

Economic activities and events will be held in framework of the Fair, in addition to holding many media symposiums.